Cuckoos are a bird family I can quite identify with - they leave the child raising up to more competent parents. Here in New Zealand we are lucky enough to have two rather interesting species - both of which have a taste for travel. 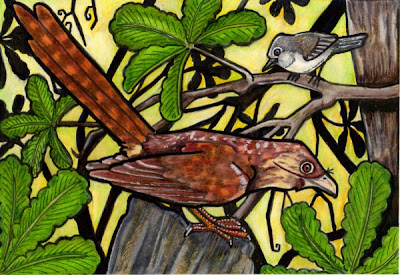 Koekoeā, the Long Tailed Cuckoo
Despite the great discrepancy in size, the Koekoea likes to use yellowheads, whiteheads and brown creepers as its foster parents. It is such a large bird, that for some time it was speculated that there was no way it could lay the eggs directly into the tiny nests. One early naturalist reported that it laid the egg on the ground and carries them to the nest in its beak. However, I have no found any further information to support that claim. However it is that the egg gets into the nest, it is a noted fact that the cuckoo egg hatches faster than the host birds. Upon hatching, the naked, blind chick then pushes out the other eggs. Even if they remained, by the time they did hatch the parasitic chick would be so big and fat and bold that no smaller chick could stand a chance of competing against him and would quickly starve. Cuckoo behaviour and their calls is entirely innate - a juvenile cuckoo never sees its mother and never would have the opportunity to learn. They are insectivorous but occasionally predate on lizards and small birds as well as fruits and berries. During winter they take a holiday to the tropics, dispersing through the archipelago of islands in the Pacific Ocean. 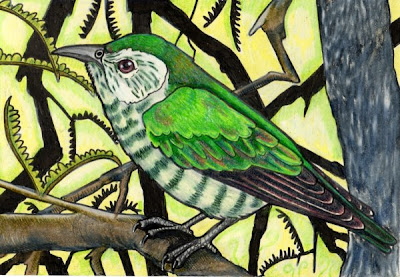 Pipiwharauroa, the Shining Cuckoo
The shining cuckoo generally chooses the grey warbler to foster its young. Because these birds spend the winter months in the Soloman Islands, they return to New Zealand relatively late - given the fast-breeding warblers a chance to raise their first brood before foisting their loud and rambunctious chicks upon the tiny host birds. Because the warblers make dangling nests, with only a tiny opening, once again it is difficult to imagine how the adult cuckoo might lay directly into this. In this case there is photographic evidence of an adult bird carrying aloft an egg to insert it. The shining cuckoo is also an insectivore, and its migration dependent on insect numbers.
Posted by LemurKat at 10:29 PM