I've been trading moley (moleskine) journals around for a wee while now, and have recently received my third. Another watercolour one, the theme for this one is "birds" and therefore, right up my alley.

Since I am a New Zealander, I feel obliged to draw New Zealand birds, and thus decided to start with two birds that are frequently confused with one another, despite the fact that they have very few traits in common.

This is of course, the Weka (Gallirus australis) and the Kiwi (Brown - Apteryx australis).
Now, here are the things these two birds have in comon:
* They are both brown in colour
* They are both flightless
* They both live in native forest
* Both eat bugs and grubs and other invertebrates.
* They have strong, sturdy legs for walking.

And that is pretty much it.

Yet tourists will still caption photographs of wekas with "kiwi!" (although I cannot find any examples right now).

Here is how the two are different:
*Weka are rails, kiwi are ratites.
* Kiwi DO NOT have visible wings, their wings are greatly atrophied and little more than hooks underneath their feathers.
* Kiwi feathers are loose and soft, more like fur than feathers (and their body temperature is closer to a mammals).
* Kiwi beaks are very long, a tool used to hunt about in the leaf litter for the aforementioned bugs and grubs. Their nostrils are also at the tip of their beak, not the base like all other birds.
* Weka are diurnal (mostly), kiwi are nocturnal (mostly).
* Weka are curious and sneaky.
* Kiwi are shy, but can be bolshy if disturbed (and make a right royal racket as they crash through the trees).
* There are birds that resemble a weka elsewhere in the world.
* The only bird that comes even close to resembling a kiwi is the snipe (extinct in mainland New Zealand).

Please ignore the fact that I have drawn a North Island weka in Fiordland. I forgot what subspecies it was when I added in the background.

I have another Double Page Spread to draw. Because I have started with flightless birds, I may as well continue with them, and will be drawing a kakapo and a penguin. And if you can get the two of those confused, then I suggest you get your eyes tested!
Posted by LemurKat at 3:27 PM No comments:

Tail of Two Scions: An Update

As some of you may know, I am halfwy through writing (what I intend to be) a trilogy. Entitled "Lemurs (A Saga)" it follows the adventures of Aurelia, a mostly Silky Sifaka who is orphaned and fostered by ringtailed lemurs, in Ifaty on the west coast of Madagascar. It is an (or hopefully will be) epic fantasy novel, with lemurs. The lemurs have a culture that is a hybrid between that of real-world lemurs, the Malagasy people and a healthy dose of pure imagination. I blogged extensively a few years ago, when I wrote the first draft of "Fellowship of the Ringtails" (book one) for the Southern Cross Novel Challenge in 2011.

I am pleased to say that, despite my rather negative posts towards the end of June 2011, "Fellowship of the Ringtails" DID have a future and HAS been published. Even if no one has bought a single copy in any of the formats.
If you wish to actually buy a copy, here's where you can acquire it from:
Amazon (in paperback and ebook format)
Kobo (epub format, with the illustrations in COLOUR)

Anyhow, more because I want to than because I feel anyone will want to read it, I am working on book two: "Tail of Two Scions". I wrote the first draft for this back in NaNo 2011, and blogged about that too but then ended up deleting the entirity of Aurelia's side of the story (although I am still really very fond of Rakoto's, and shall keep that).

Essentially, the storyline of book two follows two characters -  Aurelia, the true (albeit illegitimate) heir to the royal throne and Rakoto, not a true heir, but by Madigaska rule, the official heir to the royal throne. Hence the "two scions" of the title. Rakoto's story is set entirely (so far) in Narivo, the capital city whereas Aurelia's needs to be set in Bemaraha, the grand tsingy, where she has joined a scholarly collective of lemurs that call themselves the Karazana.

Here the problem lay. I did not really have a good grasp on where Aurelia lived, and what she could be doing there. Obviously she needed to be doing something vaguely interesting - as I am sure that the reader would not be particularly enthused about hearing everything about her daily lessons, but that if I just skipped all that and got straight to the bloodbath* climax, then the reader would feel cheated too. So, I experimented. In the original plot, she went off with a bunch of other lemurs and travelled through the tsingy and rode on a hippopotamus, got captured by a mandrill and a bunch of other stuff which seemed like a good idea at the time, but in retrospect seemed kinda silly and took the plot off on a wild-mad and completely unnecessary (excepting for wordcount) tangent. Then I dilly-dallied around with some other stuff in which nothing much happened.

Finally, the problem occured to me - I needed to better understand how the Karazana worked.
So, I got myself a personal wiki via TiddlyWiki and then I popped along to TiddlyToddler to learn how to use it properly. And I started brainstorming. That worked pretty well - I wrote out a timetable for the Karazana Novices, I made a list of Rules, I worked out different Punishments and then started writing. First goal - to see how many rules Aurelia could break in the first few pages (only about three, but they were pretty serious ones, and she's currently up to eight, including breaking some twice).

This has worked out rather better. In fact, I'm starting to get into a sort of fairy-tale mash up now in which there are elements of Billy Goats Gruff, Jack and the Beanstalk, Hansel and Gretel, Beauty and the Beast and maybe a touch of King Kong thrown in for good measure. I might be able to manage Arabian Nights as well.

I intended to work on this side of the novel for SocNoc 2013, but due to various other events (ie: finishing the final edit on book 1) I did not get started writing properly until the 15th June. Halfway through. Therefore I am attempting what they call "HalfNoc" (25k). It is still feasible that I could write 50,000 words in the remaining 8 days of this month, but it seems unlikely.

So far Aurelia has: climbed a stone spire to steal an eagle's egg, fallen and given herself a concussion, been assigned "dung duty" (exactly what it sounds like) as her punishment, befriended an antelope calf (actually, it's a goat, but the lemurs don't quite have my knowledge of taxonomy), rescued antelope calf from a "troll" and now been captured by aforementioned troll.

The troll is a mandrill, the antelope calf is an aoudad, or barbary goat and Aurelia is going to be in a whole lot of trouble... with any luck, these events will work to be tied in with later events. We shall see. Otherwise, I guess I'll just cut them out again and relegate them to another "removed story" text file.


* This ain't Game of Thrones
Posted by LemurKat at 5:50 PM No comments:

Back in 2007 or so, when I was first making ATCs and what-not, I joined a "Black Birds" swap, There are always swaps involving crows circulating on the ATC forums. Personally, I don't really like crows that much as an artistic subject - they're hard to draw and difficult to colour. Anyhow, I made up this image that formed into 6 atcs: 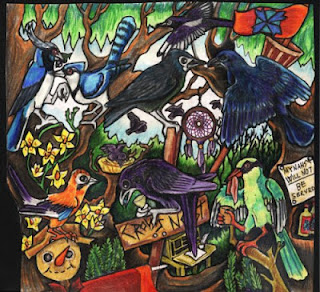 For the recent Summer Solstice (*coughs* it's midwinter here in NZ) Swap, I decided to redraw the image, to see how much my art had improved. This one was not cut into 6 atcs, so I did not have to be quite so precise at the bird placement. My bird anatomy has definitely improved, although unfortunately the scanner washed out some of the pale blues in the sky. I changed one of the bird's species too, as I was bored of colouring black. 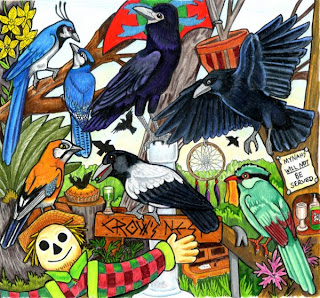 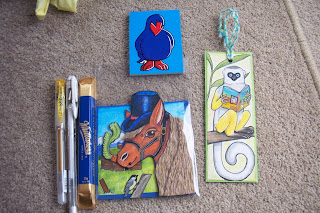 Now this Secret Solstice package has been received - I can show it off! It includes the Pilgrim Pony, who is a 4x4 chunky with moveable carrot and real twine mane, and an Aurelia bookmark - she's reading her biography! Other items included were a couple of gel pens, a whittakers chocolate bar (very yummy, made in NZ) and a little pukeko notepad that was probably made in China, but is cute anyway.

A close up of the pony, minus the glare: 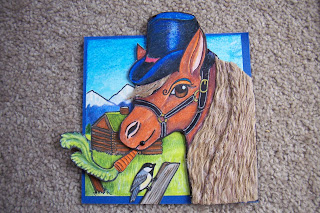 And here's two of the three packages I received (the third is yet to arrive):