I'm spending most of my artistic talents currently working on more Secret gifts - this time with a Halloween theme - so they'll be along later.

For now, here's some original pokemon (ie: Fakemon) with an Aotearoa theme: 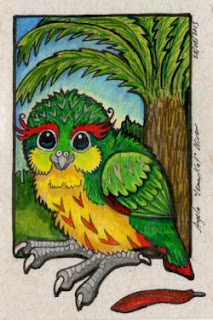 Kakaiti - this tiny bird pokemon is very curious, and hates to be confined to a Pokeball. If thus restricted, he becomes despondent and disobedient. He learns by observation and mimicry. Although his wings are too small for him to fly, he uses them to bounce around rather like a feathery tennis ball.
Length = 7" 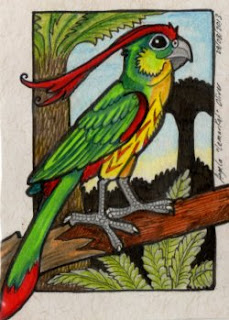 Kakatoa - this parakeet pokemon can fly very swiftly, and is very noisy and curious. Like a human child, he learns how to manipulate objects as tools and is sophisticated enough to plot ahead. Although he does have several attacks of his own, he learns mostly by mimicry and will copy those of other Pokemon. He is very bold and playful, but can also become jealous if his human's attentions appear directed elsewhere...
Length = 3'3" 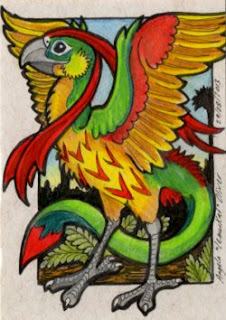 Kakakaha - this dragon-like avian is both powerful and protective. He is very loyal to his friends and family, and will often put himself between them and danger. Skillful and acrobatic on the air, he is also quite formidable on the ground, and it is said that his talons are capable of disembowling an adversary.
Length = 6'6"
Posted by LemurKat at 11:01 PM No comments:

The Aesthetic Appeal of the Equine 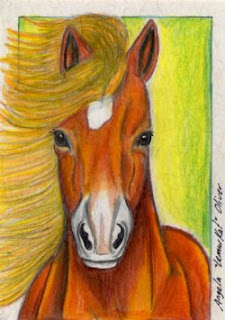 At present, I've been watching a lot, and I mean a LOT of QI. It's great to have on in the background while I'm making art, and gives me loads of random stuff to talk about. After randomly watching episodes for some time, I have now begun completing the seasons. Anyhow, in the episode on Electricity, they put up a picture of a horse and an eel and the question was "how would you use a horse to catch an eel?" The answer was, frankly, rather barbaric, but then Stephen Fry became quite taken by the horse, and the discussion turned to how "sexy" the horse was. Which leads one to the question - what is it that makes horses "sexy"? Is it the luxurious mane? (but lions have manes and they're not often considered "sexy"). Is there something to do with the shape of the face that strikes something in the female (or homosexual male) brain? Anyhow, there is no questioning that there are some damned fine Arabian horses, with beautiful hair (try googling "Fabio horse") and one such equine is the model for my atc above.

This is a trade for NZ Flutterby, and I hope she likes him!
Posted by LemurKat at 7:48 AM 1 comment:


This latest piece that I share with you is a commission, from some ecologists in Australia, who commissioned it to give to someone else. Actually, come to think of it, I'm going to future-date this, in case the recepients accidentally stumble across it. It features two galaxias fishies of unspecified species, in their natural habitat. Colours were specified as wanting the contrasting blues and greens, with a hint of red.

I like it, and the commissionees do too, so here's hoping the recepients do as well! 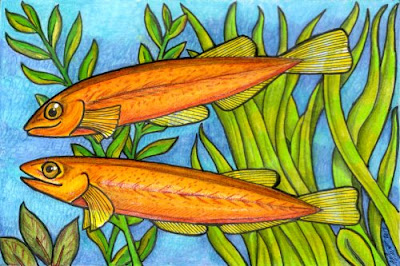 Posted by LemurKat at 5:52 PM No comments:

Remember my art doll obsession? Well, I'm back into it again now - in a BIG way. So much so, that I began hosting a Pokemon Mini Art Doll swap over on ATCs for All (they are called "mini" because they are only about 6 inches long, except Sceptile, due to his big tail). Alas, sign-ups have been pretty low - only four players, but  I decided to make up a few, and once I started I could not stop!

Here are the four I have made so far:


And my old favourite:

I am still tempted to keep making more - I would like to make a Nidoran - maybe both male and female, and there are so many other awesome Pokemon from the early days. The more recent ones are just kinda a bit neh though...
Posted by LemurKat at 5:51 PM No comments: