A taste of kiwi with some literature thrown in 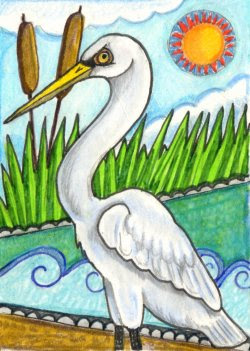 An elegant Kotuku contemplates her next meal. She's about to wing her way to Argentina. 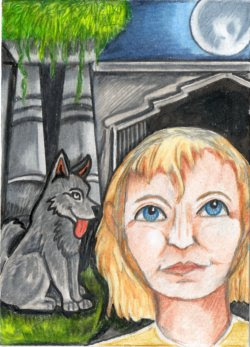 Bod and Miss Lupescu, from Neil Gaiman's "The Graveyard Book". A traditional Maori talisman. The meaning behind these little carved deities is much debated. "Tiki" refers to a male demigod in Polynesia, and it may have links with fertility or birth deformities (protecting against). They are often carved from is pounamu - greenstone.
Posted by LemurKat at 9:13 PM No comments:

Down by the Seaside 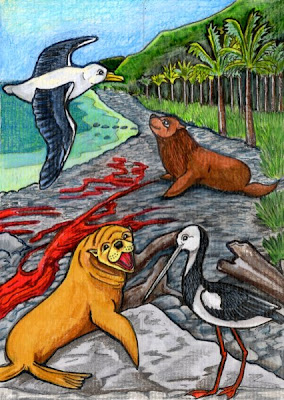 Down by the sea you might find a pair of Hooker's Sea Lions, an albatross and a pied stilt. Obviously, the perspective is a bit off for this. But still, it's a pretty 5x7 inch piece.
Posted by LemurKat at 9:27 PM No comments:

Return of the Totemic Beasties 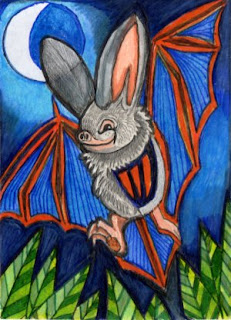 If your totem is the Bat:

You are highly adaptable and alert to what is going on around you. Highly sociable in nature, you are also highly attuned to the emotions and hidden signals from others. Therefore you are wise in empathy. 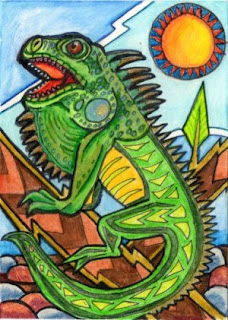 If your Totem is the Iguana:

There is much about you that is misunderstood. You are patient and kind by nature. You can be suprisingly gentle and understanding. Water calls to you, and you can often be found near it or in it. You do not like to feel confined or trapped.
Posted by LemurKat at 6:36 PM No comments:

Daisy, daisy, give me your answer do...

A selection of colourful daisies ATCs to brighten up your day. Referenced from my mother's gardening book. 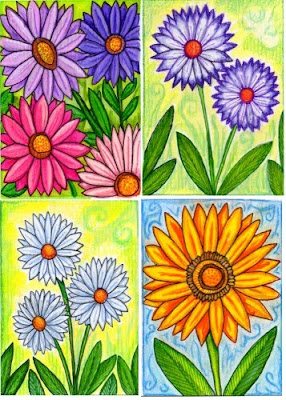 I just realised that I've done them for each number from 1-4. That's kinda funny. Wish I'd realised sooner, I could have put the number on them. Guess they'll be organised on the page in ascending order!
Posted by LemurKat at 11:20 PM No comments:

Well, not entirely, but since these are felines of rather fancifcul colouration, they could probably get branded as such.

What are Sparkledogs? A deviant art, juvenile obsession for animals with unnatural colouration.

At least these aren't neon! 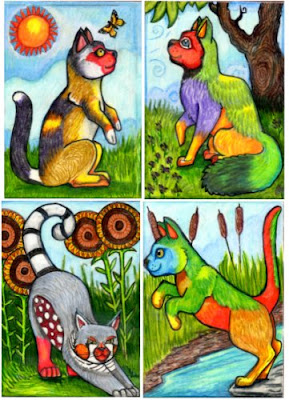 Sorry there hasn't been a lot of art recently. Life happens!
Posted by LemurKat at 9:47 PM 2 comments:

Christmas is in the Air

In preparation for christmas, I have begun making up some gifts. One, which I cannot show yet, is a matching set of ATC storage devices and I am rather proud of how the set looks together. But for that, you'll have to wait and see (I have to get the photograph off my camera for a start, and the cable is all the way over there...).

However, today and some 4-5 hours of work produced this: 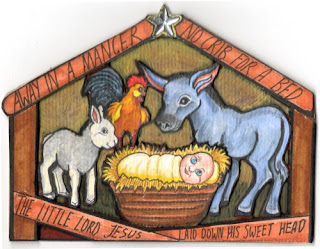 Like the Cuckoo Clock, it is 3d, although this one has 4 layers. Five if you could the star. I realise there are a few issues with it and the baby is frankly, a little freaky (but aren't all newborns?), but I hope the recepient likes it. In the offchance that she doesn't, I intend to send an ATC or two as well to "soften the blow". 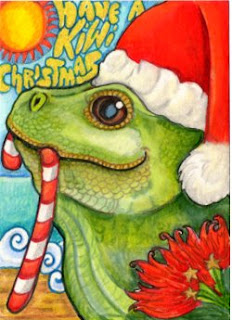 And my Christmas ATC. Every year I try and design a new one. Last year it featured the Pokemon, Delibird, this year it features a Tuatara in a Christmas hat. I think I know which one I prefer. One lucky person will receive the original, but I imagine quite a few prints will be made of this toothy chap!
Posted by LemurKat at 6:27 AM No comments: 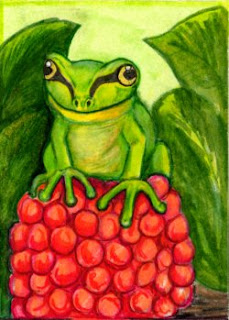 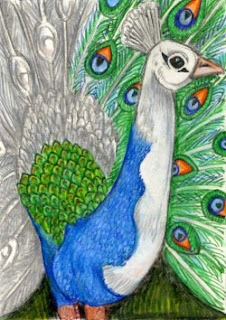 This remarkable individual was discovered when I undertook some reasearch via google for images of "white peacocks". As Moondance loves both blue and white peacocks, and was indicating they would appreciate me drawing both, and I had tried - but failed, he seemed the perfect subject.

This piece was done using prismas and polys, and a lot of pencil, blended with the white prisma and a few highlights added in light, light blue.
Posted by LemurKat at 6:46 AM No comments:

Cuckoo Clock chunky. I made this by first drawing the entire thing on a 4x6 piece of card. Then I coloured it in, except for the clock, I left a blank circle for that and made it up on a separate piece of cardstock. Tha hands really move, they're attached with a split pin. When I attached it to the card, I first took a thick board circle, and cut out the middle, so that the split pin could turn freely. After that, I cut very carefully around the roof, the forest floor and the little door. The roof and floor I backed with thick board. I then mounted the piece onto mroe cardstock, trapping the ribbon between the pieces. The little cuckoo door is held in place with a folded piece of cardstock, and the wee bird kinda pops out too. Although you can't actually keep the door shut.

I'm quite proud of it, actually, and I hope the recepient enjoys it too.
Posted by LemurKat at 6:10 PM No comments: 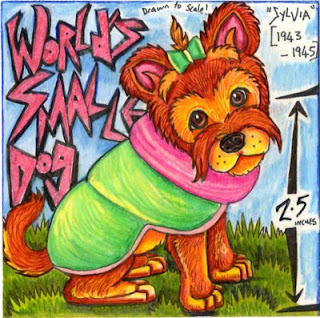 Sylvia passed away in 1945, aged less than 2 years old. But Sylvia was very special, for she is, alledgely, the World's Smallest Dog.

She was a Yorkshire Terrier and measured 2.5 inches high at the shoulder, and 3.5 inches from nose to tailtip. She weighed a mere 4 ounces.

The Yorkshire breed have constantly fought for the rank of "smallest living dog", a title that is forever changing because of course, the smaller the dog, the more susceptible it is to injury, cold or over-eating. Most owners seem to delight in dressing them up in little coats, as depicted here.

Although this picture is pretty much to scale (it's 4x4 inches in size) - it is unlikely that Sylvia looked anything like the Yorkie depicted here. No photographic evidence was forthcoming - although I did find pictures of Pinocchio (she appeared on Oprah and alledgely died from eating too much), she has a website here. Note that it says nothing about her death.

And the colours in this piece are exaggerated to give a whimsical air. I just thought it rather nifty that the World's Smallest dog was the same size as my favourite artistic hobby.
Posted by LemurKat at 10:10 PM No comments: 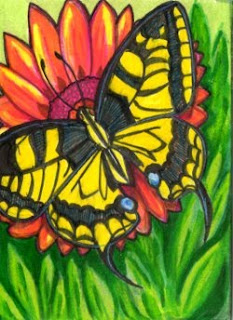 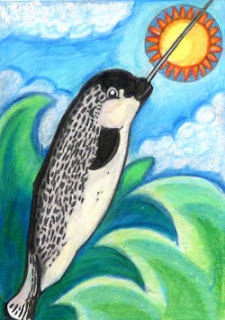 Narwhal spears the sun. For Pixiepoo. 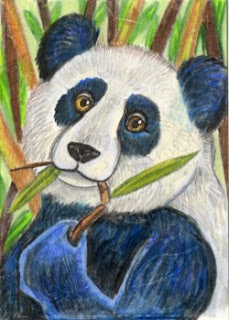 Giant Panda's Banquet. Also for Pixiepoo.
Posted by LemurKat at 6:38 AM 1 comment:

Two of Our Faithful Friends

These two cards are for Lydia and her daughter Misty. 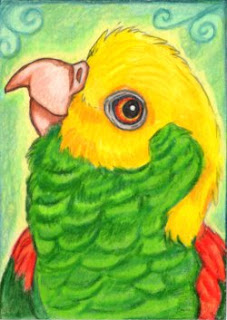 And the second features a Himalayan cat, one of which Misty has just adopted. As she is about to embark on her teaching career, I thought lots of luck - in the form of a flourishing patch of four leaf clovers, was in order! 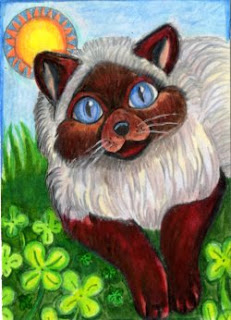 Posted by LemurKat at 7:15 AM No comments:

I am running another reading group at present and every single book nominated was a children's classic. As I have just completed my final illustration, I thought it time I shared them here: 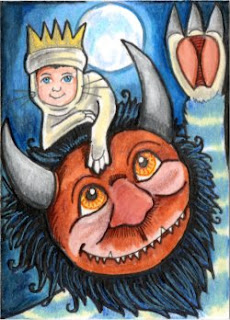 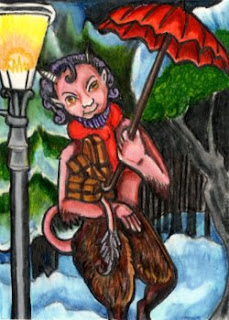 Mr Tumnus parades towards you, umbrella, parcels and tail in hand. He's stepped straight from the pages of "The Lion, the Witch and the Wardrobe" by CS Lewis. 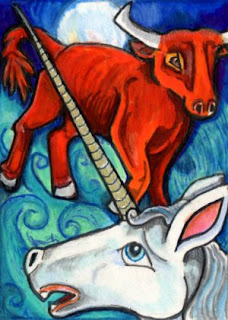 The last free unicorn screams as the Red Bull comes charging towards her in "The Last Unicorn" by Peter S Beagle. 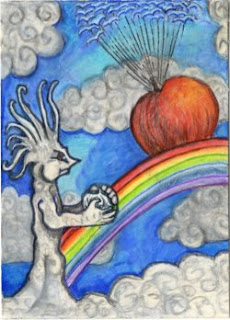 A Cloud man has failed to hail on the peaches parade, as it skips under the rainbow and away, in "James and the Giant Peach" by Roald Dahl. 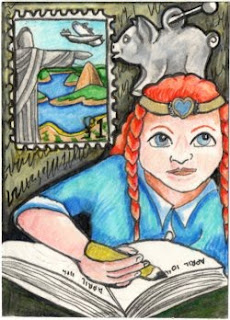 And Arriety writes in her diary from "The Borrowers" by Mary Norton.

My nominated title was "Mrs Frisby and the Rats of NIMH". I should re-read and illustrate it myself, actually. Jolly good book!
Posted by LemurKat at 10:14 PM 1 comment: 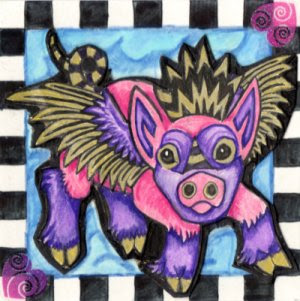