A Brief Guide to Art "Dolls"

When I was in Portland, attending the AFA 2012 gathering, I participated in Els's "Paper Doll" tutorial. This was a very useful wee lesson, although I never did finish the doll I made then (using the fox template). However, coming home I initiated a trade with the very talented Jennie - who makes masterful and detailed art dolls, however, since they are animals, I am from herein going to call them "Card Critters."

This is the first Lemur Card Critter I made: 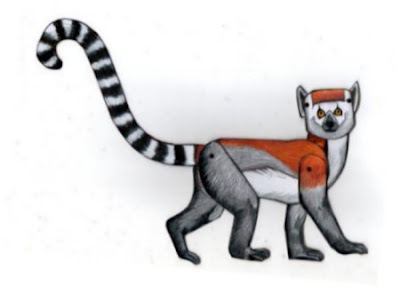 As you can see, there's nothing particularly wrong with him - he has 9 moving bits - 4 legs, tail, neck, head and each ear.

But then Jennie sent me this adorable chap: 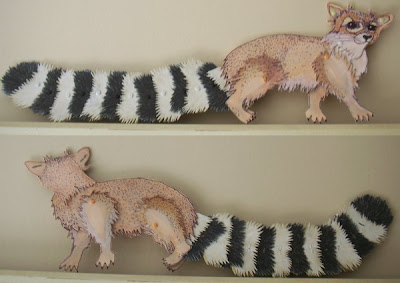 As you can see, not only is he double-sided, but every ring on his tail is hinged to move AND look at how she has cut out all those bits of spiky fur individually.

Suddenly my efforts started to seem a little pitiful. It was back to the drawing board.

So how does one go about making a Card Critter? This is what I learned from Els's tutorial:

Firstly, draw out the critter you want to make. 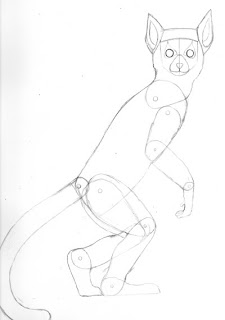 Excuse the bad scan, I could not be bothered inking it.  As you can see, I have continued through the various parts using my vague knowledge of animal anatomy to decide where things should be hinged. I have only drawn one forearm, because I intend to make two identival ones. The hindlegs, however, are slightly different.


Then I traced out each piece (ie: forearm, lower arm, hand, etc) onto a piece of acid free photocopy paper. Outlined them in sharpie and cut them out, before glueing them onto card. Then I cut that out. To do the back side, I glued pieces of paper onto the rear of the card, before cutting it out, so as to get the size exactly right.  I lined up the parts, colouring them at this stage. To do the body, I used two different pieces of card, sandwiching the tail and head between them. As with the paper, I trimmed the second using the first as a guide. Where possible, I used the same brad for as many bits as I could. This means that I didn't end up wasting brads, and also the critter did not look too cluttered. 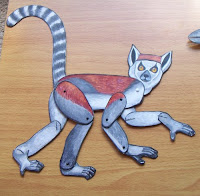 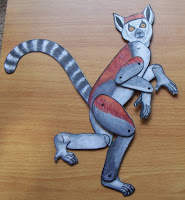 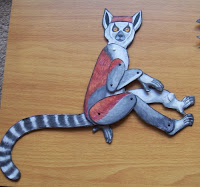 As you can see, he can manage a fair number of poses!

Next up was a raven. Now I'm onto my third and starting to feel a bit more confident, so I decide to do something really clever. I want to make his wing open. Easier said than done? Definitely!

Firstly, here is the raven's sketchwork: 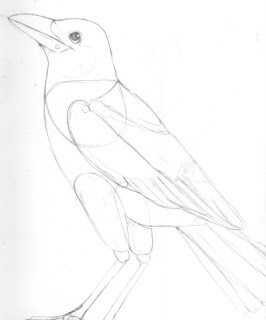 The body was straightforward enough. His lower mandible is hinged, which means he can open his beak, although if he opens it too wide it looks a little weird! His neck join is articulated which means he can look down at some scavenge. His feet - which you cannot see on this page, are in three parts - the leg, the foreclaws (3) and the hindclaw. They are connected with a brad at his ankle, meaning he can almost clasp things. I decided not to go overboard and hinge all four claws separately. His leg is hinged at the thigh and at the ... well, I'll call it elbow as I no longer remember the appropriate term. His tail feathers (he only has three currently, but I may add more) spread out and yes, his wings do open.

Here he is in all his glory: 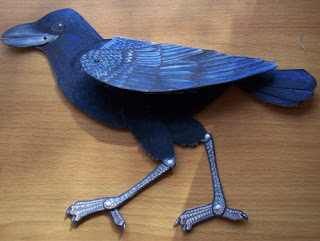 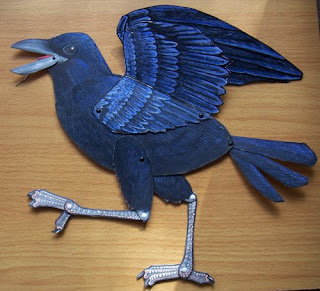 Making the wing was the hardest part, and regrettfully, I have had to hinge it at both the shoulder and towards the rear, as it is too heavy to allow for greater flexibility and still remain stable. Ideally, I should have used thinner card. Anyhow, as you can see the secondaries are both on the same piece of card. This has been scored so that it folds in half, allowing the actual secondaries to fold over his body. I realise this may not be 100% anatomically accurate, but would challenge anyone to do it completely realistically! The primaries are a separate part, and they are connected to the secondaries only by one brad at the hand joint. When folded down, they can be angled to cover the lower bent bit entirely, as can be seen in the top image. Alas, I have not yet discovered a way to make them stay down, as the card is too thick. I am going to attach a paperclip to his spine for his journey to Washington State.

He has 15 moving parts, using 10 brads (one of which holds the wing in place and does not allow movement).

Next I shall be making an owl. 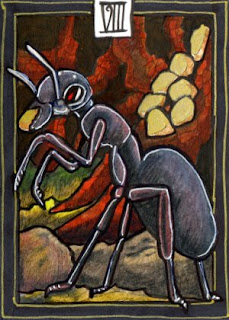 With hard work and diligence, the Ant can achieve her goals. (Eight of Coins) 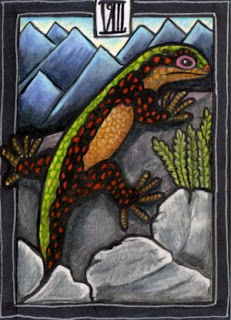 This Sinbad skink may think that he is trapped, however, it is but a simple matter to free himself. He just has to sacrifice his tail to do so... (Eight of peaks) 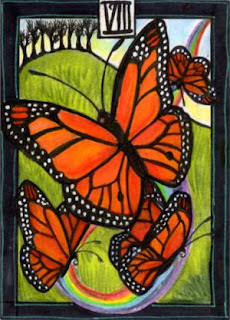 The Monarch butterflies dance through the air, filled with vibrancy and life as they set off on their annual migration to warmer climes. (Eight of Trees). 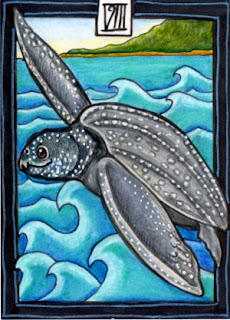 This leatherback turtle is leaving behind the golden shores and heading off into unknown waters, in search of a new future. (Eight of Waves).
Posted by LemurKat at 10:21 PM No comments: 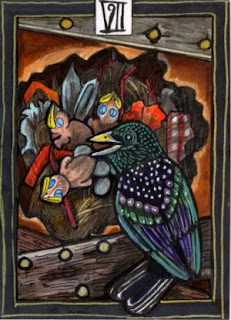 The Seven of Coins is represented here by a starling and her brood. She now has to make the decision on whether to concentrate on her three ugly chicks, or to let the other four eggs hatch as well and risk the stress and rigors of raising seven offspring. Also, her nest is made out of garbage - in case you couldn't tell. 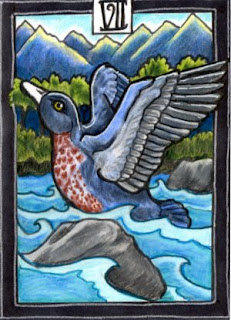 On the Seven of Peaks, the Blue Duck (Whio) is engaged in an exercise of futility as she tries to swim against the fast flowing current. 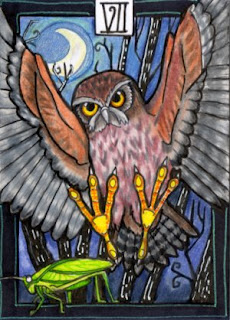 The Seven of Trees is represented by a Morepork. However, it is a card of defiance and holding victory against competitiors and thus I intend to draw this card again. With a pair of robins mobbing the owl. 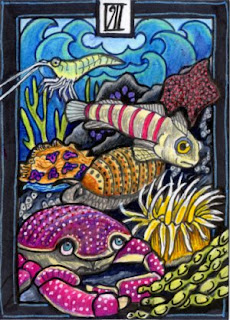 And the Seven of Waves - my favourite of my minor arcana to date. This colourful card represents choices and fantasies - represented by the critters found in rockpools around the coast. Some might be a tasty snack, others might pack a nasty nip or sting. So make your choices wisely.
Posted by LemurKat at 8:41 AM 1 comment:

The good news is, it will be printed! I have found a website - The Game Crafter - that will print games in an on demand manner. Therefore, I shall be printing the Nz Naturally Tarot as Poker cards (ATC sized), this is because of the size of the originals - so stretch it into the shape of the regular tarot cards leaves too much dead space. Price should not be too high. It only costs me 9c a card for the Poker cards - instead of 19 cents (for the tarot) with the box being around $2.39. This comes to a cost of around $10 to make, so I will probably sell them for $14.99 (TGC takes a cut of the sale too). I am wondering if there are some fun bonus cards I can add. The box will hold up to 90 cards.

I have devised photographic borders in different colours to make it easy to differentiate between the suits and the major arcana.

Here is a sample:

Background photos are waves for the Waves suit, ferns for the Trees suit, clouds for the Peaks suit (suit of air) and coins for the Coins suit. Feathers for the Major arcana. Card back is cut from a photograph and mirrored in four directions to make it completely symmetrical.

And now for the Sixes:

Six of Coins - A good time to be generous with your wealth - as this pampered pussycat allows two wild hedgehogs to feed from his bowl. (Image on right is revised version for deck, but is an act of cut and paste)

Six of Peaks - the Mountain Ringlet Butterfly is escaping the web and leaving turbulance and turmoil behind.

(I was experimenting with hand drawn borders here, for the print run, but decided to go for photographs insetad).

Six of Trees - This jeweled gecko enjoys his place in the sun as he celebrates his "victory" over the dragonfly.

I have started on the Sevens now and thus only have 14 cards left until I finish the whole deck!
Posted by LemurKat at 10:30 PM 3 comments: