Rememberhow I said I had done more art in the month of July than the rest of the year combined?
Well, here it is and here's why - Pick-A-Themes. I signed up for 3 groups over two different swaps.

In a pick-a-theme, there are five people in your group, and each chooses a theme - something that they collect (mine for both swaps was lemurs, one in traditional Malagasy clothing, the other "stonepunk"). Then you make for each person a card in their chosen theme - meaning they get four cards with the same theme by four different artists, and sometimes interpreted in different ways.

I started with an eye-dea. 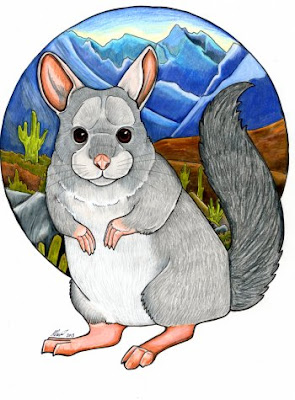 This cute wee chap was made for my friend's birthday.She loves chinchillas, and who couldn't love a face like that, really?

Chinchillas are a rodent native to the Andes, where two species occur. Although domesticated forms exist - taken from the long-tailed chinchilla breed, both species are critically endangered in their wild habitat. They live in burrows and crevices, come out at night and have thick fur to cope with their cooler environment. If temperatures exceed 25 degrees they start to suffer, and they cannot sweat, instead they dissipiate heat through their large pink ears. Their pelts are greatly desirable in the fur trade and it takes 150 chinchilla to make one coat. I'd rather these beautiful creatures keep their fur!

Expect to see more art soon.
Lots of Art.
I have made more in the month of July than in the rest of the year - COMBINED.

Alas, a couple of months ago I was tying a plastic bag of rubbish closed, and suddenly felt a stab of pain through my hand. It was briefly very intense, quickly dulling down to a painful throb and for the rest of the day my right hand felt like a claw. I could still use it, but it hurt to do too much fine work with it. Over the next few days the pain gradually receeded, and now I can sketch and ink without pain, however I have discovered that when I engage in intense colouring (such as for large images) it cramps up and the third knuckle seems to swell a little. I did ask my doctor about it, but by the time I went the pain had decided to absent itself, only to flare up again later. So now, like my gammy right knee, I now have a gammy middle finger.

Working on small pieces - ie: anything 6x4 or less, doesn't seem to affect it greatly. Still, best to take things slowly and look after it. This piece above caused it to cramp up rather unpleasantly. *sighs*
Posted by LemurKat at 8:55 AM No comments:

The Little Blue Penguin - seen here on Stewart Island (with signs of civilisation removed to make the image more natural and easier to draw) and the Kakapo - seen here in Fiordland, where they have not lived for quite some time.

Two very different flightless birds of New Zealand. Penguins actually evolved here, and we have several native species - of which the blue is amongst the smallest. The kakapo is the only flightless parrot in the world, and fills the niche of badger, being that we have no mammals here. It is a remarkable bird and has a real personality.
Posted by LemurKat at 7:16 AM No comments: