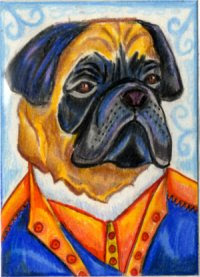 Another RAK. Because if anything can cheer a dog-lover up, it's a mastiff in a patriotic costume.

Well... it looked boring before I added the clothes!
Posted by LemurKat at 9:11 PM No comments: 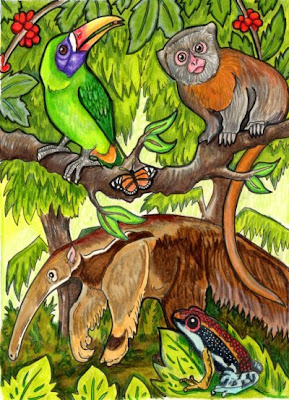 And now... because two of my ATC friends have had a rough time of late, I've decided that nothing makes a day brighter than a cute lemur: 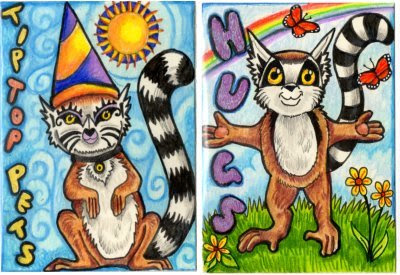 The first is in the style of Original Youth (and will be posted to her tomorrow) and the second is a sorta Looney Tunes style. For Tweety who has just been in hospital. And last but not least, the bookmark for my Reading Group participants.

The tail is designed to hook over the spine of the book.
Posted by LemurKat at 9:00 PM 2 comments: 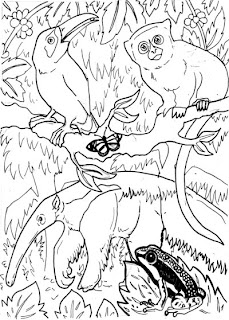 Today's offering is merely the lineart for a piece I am working on for Miloccep. It is a 4-ATC piece featuring 5 Amazonian animals. They are the toucanet, the pygmy marmoset, a species of butterfly, a poison dart frog and a giant anteater. The plant featured is coffee.

Aside from that, I have not been doing much. A couple more quick-draw birds that haven't been scanned yet and that's about it. TOmorrow I need to colour this in and design a bookmark for my almost finished Reading Group.

I have had three letters lost in transit to me recently and am starting to get somewhat antsy about the mail system. I think it might be time to stop the art mail for a bit. I hate it when people's unique work goes AWOL on its way to me. Might be time to dust off my lemur novel and get writing!
Posted by LemurKat at 11:17 PM 1 comment:

A week without art

And only three pieces from today:

These two critters belong to Pannya and are called "Mousalopes". The first is named Keeta and the second is Nochi. as you can see, I've done them both in different styles - Keeta in my mostly-realistic-no-outlines style and Nochi in a more colourful and toonful manner. I hope she likes them. 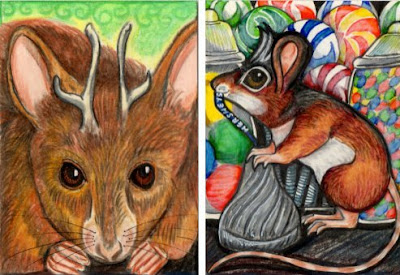 The third was intended for my portfolio book and is based on the novel "Name of the Wind" by Patrick Rothfuss. The beastie is a draccus - described as a gigantic lizard-cow I decided that anything like that would be quite saurian in appearance, and thus stole traits from various dinosaurs. The two faces in the top left are Kvothe and Denna, peering out of a cave. Yeh, I know they kinda look like they're floating in mid-air. I'm annoyed at myself for messing them up. 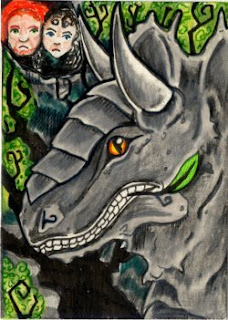 Also, I rustled up a couple of quick-draw birds, but they haven't been scanned yet. Am feeling a bit antsy because it appears my landscape and 13-min bird cards may well be lost in the post... Still, more arrived at their new homes today and I received a lovely package of art supplies from this lovely lass I met in Hawaii by the name of Laura. She and I have been corresponding via old-fashioned post and email and today she sent me some more prismas! Which is great cos some of mine are getting awfully short...
Posted by LemurKat at 8:21 PM No comments: 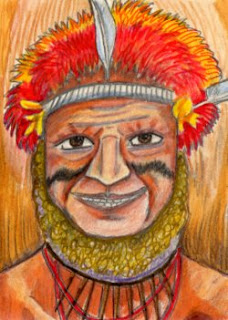 Another piece for the "people" page of my portfolio book. This is a Papua fellow - a human bird of paradise, you might say. I found his picture in a booklet of trip itineries. 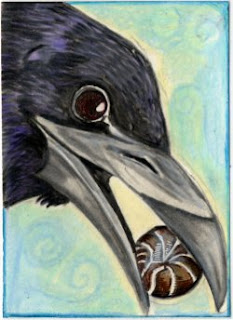 I've done a lot of crows, ravens and black birds. Not because I particularly like them, but because everyone else does. I don't mind them - they're smart, impressive and make a good alarm clock (when on holiday, we only have a few rooks in New Zealand, nothing more dramatic). However, due to various spiritual reasons, everyone seems to love ravens and crows.

So, here is my first decent drawing of one. The first that actually looks like a crow and isn't cute, cuddly and well, wrong. He has a pillbuh in his beak, because he's for a PAT where the choice was "crows or insects" so I went with both.

In my searching I did find someone who had developed a vending machine for crows - when they insert coins into it, they get a reward. It was part of a scheme to make crows useful in areas where they're reviled as pests. The idea was, they'd pick up lost coinage. I wonder how long it would take them to work our how to break into the boxes? 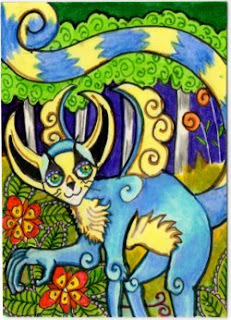 She doesn't usually draw animals, except for me ^^ But I've decided to draw Katta, cos well, that's what I do. In her style, of course. So I've got the bold colours, the somewhat exaggerated features, the swirls. The flowers and trees are directly inspired by her art, I hope she likes it.
Posted by LemurKat at 7:51 PM No comments:

Feeling a bit down. Don't know why. Probably just tired.

Finishing up the trade with Sorjei on deviantart we have: 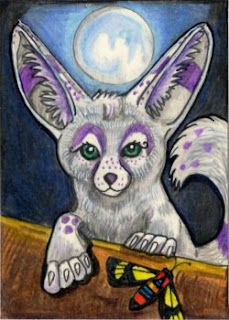 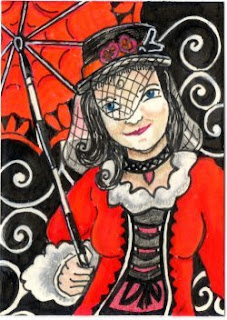 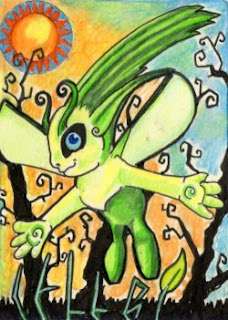 And a Kayak chicken for Kayakchickee. I hope she doesn't mind! 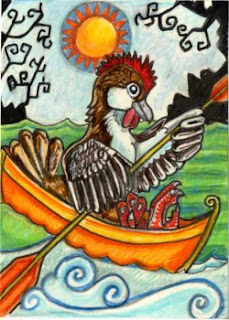 I'm thinking it might be time to take a break from the art and embark on a new project. Maybe it's time I got my novel finished. I've almost finised up all my trades, after all.

Or perhaps I should get this pesky wedding business sorted...
Posted by LemurKat at 8:27 PM 1 comment:

In case you didn't guess, I've got a week off work, and thus am quite productive indeed. Anyhow, here's the completed set of Noah's Ark cards: 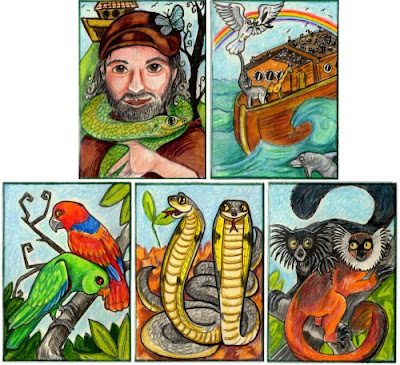 An awesome suggestion for a quick-fire ATC swap had me creating these five cards in short order. The theme for the swap was "Noah's Ark" and the requirements were one ark and three sets of animal pairs, prefereably - mammal, bird and reptile or insect for a bit of variety.

Noah himself I have drawn as a hostess gift. He is based on a photograph of a portrait of a young Hebrew man found via google. They do not look much alike. The ark is loosely based on the Christchurch Ark, found in the Getheseme Gardens on the Port Hills. Some people get married there.

The animals themselves I chose in two cases for their sexual dimorphism - so we have male and female Eclectus parrots (the female is the red one), and a pair of Black lemurs (once again the female is the red one). However, the snakes are just there because I didn't have a decent tortoise picture on hand at the time. And snakes are awesome. They're King Cobras, in case you're curious. No sexual dimorphism - although males are larger. However, they are somewhat monogamous, as far as snakes go.

And we sat down to watch a DVD this evening so I drew out my prismas and rustled up some more birds with the help of an awesome library book, "100 birds to see before you die": 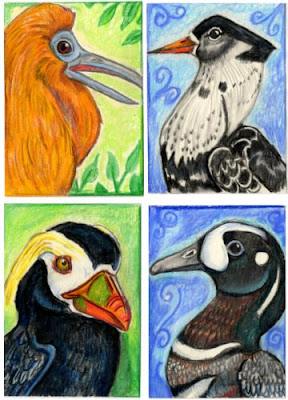 These fellows took between 20-30 mins apiece (the dvd was "Tropic Thunder" and it was distracting!) and they are:

All available for trade. Wrick gets first choice.

Also, last but definitely not least, prepare to SQUEE for what is, undeniably, the World's Cutest Animal: 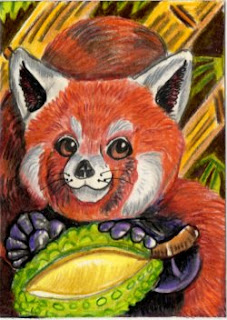 His name is Aiden and he belongs to Sorjei. That's a durian fruit he's got there. They look terrible, smell worse and taste only marginally better. Sort of like cheesy-custard apple. They smell like old gym socks. I hear they're an acquired taste.
Posted by LemurKat at 9:36 PM 1 comment: 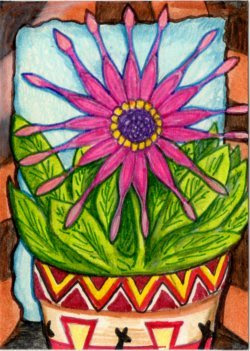 This delightful little potplant has only sprouted one flower, but what a flower! This is a purple African Daisy. Otherwise known as the Whirligig. Can you guess why? I've also rustled up a few "Noah's Ark" cards, but they will be uploaded tomorrow when I finish the set.

And, that's another PAT completed. I'm onto personal trades now ^^ And after that... randomly drawing whatever I feel like again! Woooh, I may even have some ATCs for trade or sale for a change.
Posted by LemurKat at 11:25 PM No comments:

Birds, a gnome and a zebra with flair 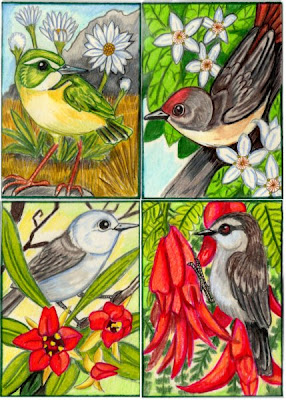 However, this zebra has style:

And this wee gnome has a red pointy hat AND a pet flower mantis. I wonder if he's taught it to fetch?

Posted by LemurKat at 9:15 PM No comments:

An eclectic array of art

When observing Novasmem's style I noted her outlines were well defined, although not particularly thick, with the shading tending to be darker around those lines. Her colouring is quite soft, something I had to really watch as I tend more towards the saturated. She does quite good realistic renderings, often with a printed paper background (I think?) but I chose portions of the background from several of her pieces. Her colours are quite bright, but not saturated and her pieces fun. My poor Katta looks rather a little too serious, but I think otherwise I did an okay job.

And here are my offerings from today:

#449. Hippopotas, the Sand Hippo Pokemon
Hippopotas are a sand dwelling creature and avoid water at all costs. They live in dry deserts in small herds. Usually, they bury themselves almost entirely in sand so that only their nostrils and eyes are visible above the surface, scanning for danger. If threatening, they can both spray sand from a port on their back and also through their nostrils. If they need to bury their heads, a special membrane closes their nostrils.

Oryx and Crake by Margaret Atwood

Creepy and bleak, this dystopian future is one I can truly envisage. From the dark, post-apocalyptic days of the present, Snowman takes you on a spine-chilling journey through the history and the frightening event that changed the world as we knew it. With its not infrequent references to extinct animals, and revelations on the darker side of human nature to Oryx's almost innocent view on life. It is also scaringly, devastatingly, real. So, chickeenobs anyone? And whatever Atwood may say, this is most certainly Science Fiction.

The Cat from New Zealand thought the birds tasted grand...

Bird is the piopio, the NZ thrush, eaten to extinction by feral cats. Building is the Beehive and the beverage is L&P.
Posted by LemurKat at 9:28 PM No comments: 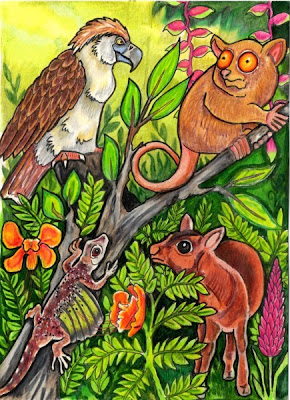 Deep in the untouched Philippines rainforest, the critically endangered Philippines eagle contemplates what will garnish her platter tonight. Will it be a tiny Maumag, the world's smallest monkey (except it's not a monkey, but the link between monkeys and prosimians, the tarsier)? OR possibly a Pilandok, the world's smallest deer? Or maybe today she shall dine upon the scaly flesh of a gliding lizard, Draco cyanopterus?

Obviously, this piece is not actually drawn to scale. As the lizard is in fact larger than the tarsier in reality. But it's bright and colourful, and the flowers are authentically from the Philippines, the island archipelago I now want to visit.

This is going to become 4 atcs in due course and be distributed out as part of the Rainforest Swap on ATCsforall, one of the best places to trade handdrawn ATCs. Currently it thus measures 5x7 inches.
Posted by LemurKat at 10:39 PM No comments: