Art:
Create a portfolio and submit it to relevant sources
Keep active auctions up on trademe - such as $1 Collectible Art Cards
Redo the cover for "Scavengers of the Deadlands"
Get at least one paying commission per month (FAIL)
Try and draw something I haven't done before.
Complete my NZ Naturally Tarot Deck.

Reading:
Read at least five titles that have been sitting on my shelf for years a while.
Try something in an entirely different genre (ie: crime) - I've read a bit of crime - still trying to determine what "entirely different genre" is for someone as eclectic as me!
Read at least five non-fiction novels
Read and review at least twelve self-published novels.

Relationships:
Spend time with some/one of my girlfriends.
Do something romantic with my husband.
Have a short holiday with my parents. - next year
Invite in-laws over for dinner.
Have a BBQ/party to celebrate something.
Have a long phone conversation with my brother (or better still, visit him).
(although this is worth doing again!)

Social:
Organise/attend a picnic with friends.
Attend at least one party.
Attend a live concert. - Next year will be!
Engage in at least one roleplaying game - possibly even a campaign.
Run a scenario/campaign for beginner RPers.

Health:
Lose 10 kilos. (haha)
Never drive to work - always bike or walk. (so far, so good)
Play a sport at least once a month (badmington or squash?) FAILED

Wealth:
Save at least $5k before US trip.
Do so well at work they feel oblidged to give me a pay rise. (not gonna happen)
Save $200 EVERY week (FAILED, not really practical, but doing pretty well)

Cooking/Baking:
Make a souffle (I've heard they're a real challenge).
Make something tasty to take to work, for no special reason. DONE
Posted by LemurKat at 11:05 PM No comments: 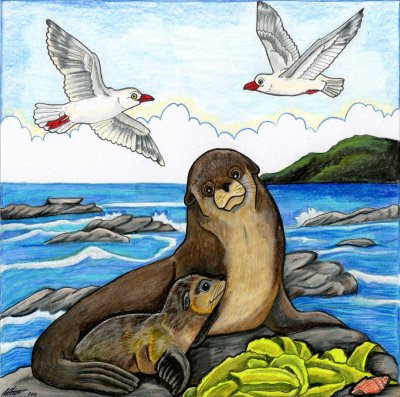 An 8x8 commission for a lass living in the US with New Zealand family ties. This is a Sea Lion cow and calf, resting on the rocks at Kaikoura whilst a pair of red billed gulls soar overhead.

I made a list a month ago on things I wanted to achieve in the next year, and one of them was to get at least 5 paying commissions. This is my second since I made the list. The first was the giraffe/elephant/zebra hybrid I made for Christmas.

I am also going to regularly keep up Art Card auctions on Trademe. Even though I make at most 30c per listing, it is certainly getting me more exposure.
Posted by LemurKat at 5:26 PM 2 comments:

All aboard the Ark!

The Animals came in two by two....

For a swap on Atcs for All. There came some confusion when early on someone asked if they were allowed to draw birds, to which it was replied that the Host actually intended for us not to draw birds, but that this swap was supposed to be for "animals". Now, this is one of my personal pet peeves - because as a dedicated ornithologist and bird lover, it really, really irks me when people seem to regard "birds"* as being something separate from all other animals. Birds are animals. Fish are animals. Reptiles are animals. Octopus are animals.

Anyway, to cut a short story shorter: Birds are now permitted. And to her credit, the Hostess just ignored my rant and did not get caught up in a typing tussle.

So of course, to thumb my nose at them further (actually, I was intending to do it this way anyhow) I chose to draw a pair from each of the main animal branches - reptile, bird and mammal. 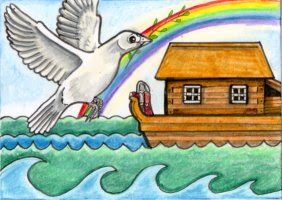 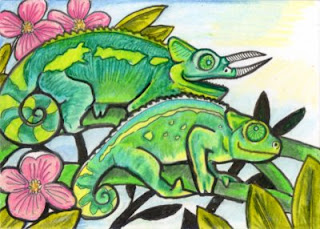 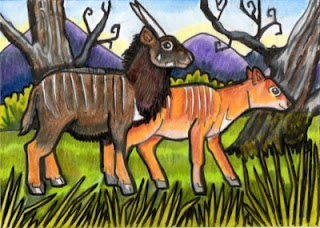 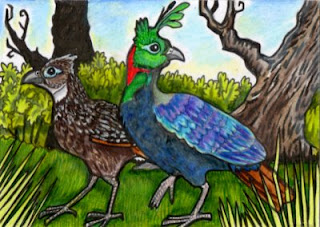 As per all these swaps that require me to draw a male and female of the same species, I tried to choose species that demonstrated sexual dimorophism. That is to say - the male and the female look quite different. In this case we have:
* The Ark and the dove (the ark was a swap requirement)
* A pair of Jackson's Chameleons (male has horns)
* Nyala pair (female is red)
* Himalayan Monal (male is blue) 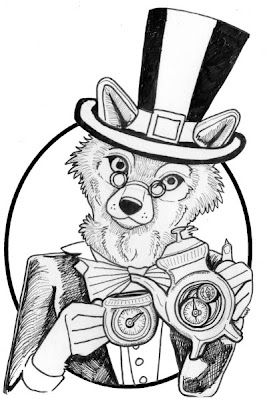 Designed for a Mad Hatter's/Victorian Tea Party.
Posted by LemurKat at 10:09 PM No comments: 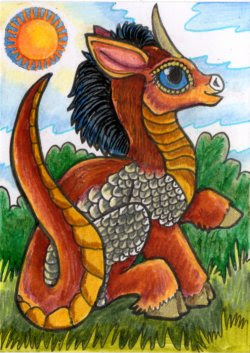 Posted by LemurKat at 6:02 PM No comments: 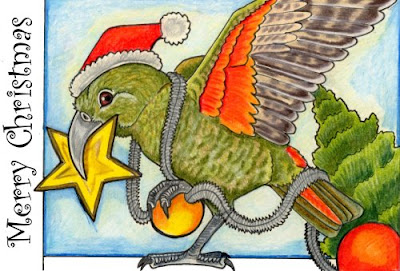 Every year, I select a different character to be portrayed on my Christmas card. Last year, Aroha took the honours (and the Christmas lights) and so - despite her insistance, she would not be depicted this year! And thus I studied my other characters.

Whilst I was busy trying to determine if I should illustrate Hemlock or Aurelia, Butterscotch or Fiantrana; I turned around and saw that Tiriki had sneakily dismantled my Christmas tree!

Thus, Tiriki the cheeky kea - a minor character in "Aroha's Grand Adventure" has now earned the distinction of being the 2011 Christmas character.
Posted by LemurKat at 8:41 AM 1 comment: 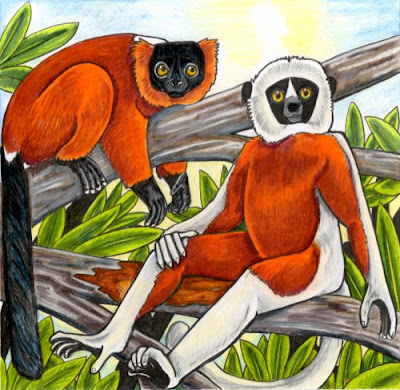 Red Ruffed Lemur and Coquerel Sifaka for my mother's 6x6 journal and her Christmas present.
Posted by LemurKat at 6:27 AM No comments:

Who can resist those big blue eyes? 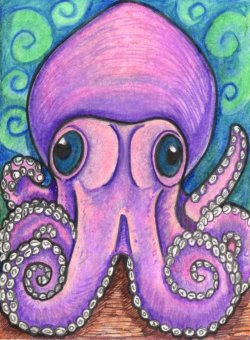 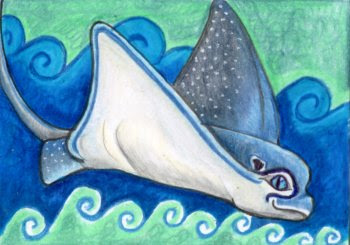 Labels: under the sea

It's been a while since I updated - but that does not necessarily mean I've been slack with the artistry. Although, admittedly, I have a bit! This is not so much a "daily art blog" as a "every few day's art blog". Anyhow, in between baking muffins for my co-workers, spending time with my husband and the extended family and working, I have achieved a bit of art. Most of it for the Pick-a-theme that finishes now in the middle of January - yay for extensions! 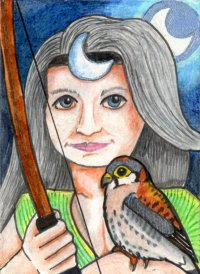 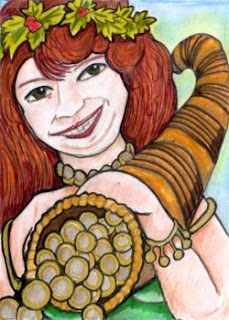 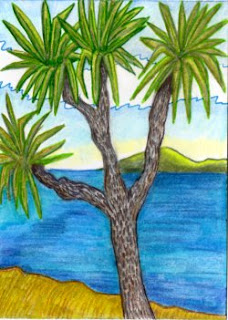 And the theme Gypsy/Bohemian. since the last was for Icekat, who has a number of feline furry characters anyhow, Idid not think she'd mind if I drew Titus, with a wig on, in a gypsy costume.
Okay, so he maybe does look a wee bit too girly. 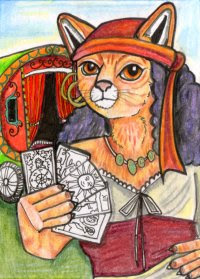 And lastly - a guitar: 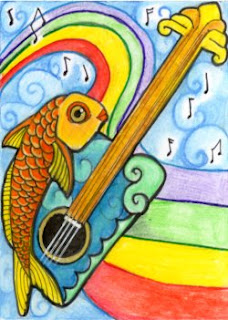 Posted by LemurKat at 6:12 AM No comments:

The Return of the Giraffe/Zebra/Elephant thingy

You may remember, I was commissioned back in July to create a hybrid beastie for the girlfriend of a fellow called Andy. Indeed, my husband found the listing on Metafilter, and pointed the chap in my direction - and he chose me. Anyhow, he thought he would like another critter as a Christmas present. However, he has left it a wee bit fine... I got the email on wednesday, started with the lineart that evening (whilst watching "Rio" which was such an awesome movie that not a great deal of sketching got done) and finished it up this morning, friday, in time to make the 5pm post pick-up. Whew - now all it has to do is get to Canada in two weeks or less...

Anyhow, this is a combination of Elephant/Giraffe and Zebra. Which is fine - but the challenge was that I had to make it different from the previous one. This was actually harder than you might think. The zebra stripes had to stay, obiovusly, as did the giraffe spots, and the only way to really do the elephant was with its trunk... Anyhow, this is the result: 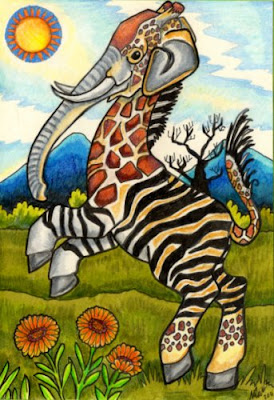 I think I like it better than the first one, actually. I hope he doesn't ask me for a third one, I'm not sure what else I can do with it! It'd have to be a zebra head, I guess...
Posted by LemurKat at 10:36 PM No comments:

The Fox and The Raven 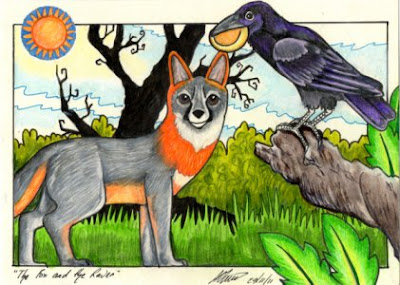 One day, Raven chanced upon a lucky treat - a tasty wheel of cheese had been left unsupervised. Snatching it up, he flew up to his favourite perch to enjoy his meal.

Along came Fox. Now, Fox was hungry, but when she saw Raven with his cheese, she realised that it was not mouse or rabbit that she hungered for. No, she wanted something richer, tastier.

She padded up to the base of the tree, and walked in circles around it a few times, studying Raven. After a moment, as soon as she saw that he had noticed her; she cried out:

"Oh what is this, most magnificant of birds! So fine of feather and sleek and black. Why, truly in all appearance, you are the king of birds."

Pleased at such praise, Raven strutted a little, plumped up his feathers and fanned his wings to show off their true glossy black colouration. He really was the king of birds!

But Fox was not done yet:
"Oh," she continued, "if only you had the voice to match - why then you would be the fairest of the fowl!"

At this, Raven opened his beak and unleashed a most terrible cawwing racket. It was not a noise to delight the ear, but truly one to disturb it. Out from his beak, the cheese wheel tumbled.

With a leap and a snap, Fox snatched the cheese from the air. With her mouth full - although her ears still rung, she trotted off into the woods, without a backward glance.

Raven fluffed his feathers in embarrassment at the trick. "Oh," he muttered, "tis truly a fool that falls for idle flattery."
Posted by LemurKat at 10:13 PM No comments: