It may not sound as though it were as big - but it was only 30 km from the central city and less than 10 km deep. The surface velocity was extreme - as was the damage. Massive damage to the "character" buildings of the CBD, serious liquifaction and damage to the infrastructure. Also... multiple casualties. Currently the death toll stands at 123, with over 200 people still missing.

It is nature's equivalent of 9/11 in terms of loss of life and economic damage.

My husband and I are okay - and our family and friends are accounted for.

Thank you to those of you that have expressed concern.

I am currently conceptualising a fundraising blog in the style of http://ripplesketch.blogspot.com which raised $10,000+ for the Gulf Oil Spill. I will not be able to get this underway until friday at the earliest (when I hope I will have reliable power, internet and a working scanner).
Posted by LemurKat at 10:16 PM 1 comment: 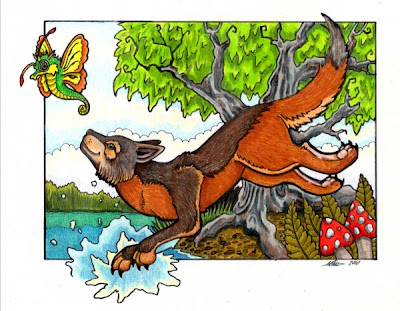 This playful fellow is the logo for the Battlecry convention in Auckland, next week. I decided to colour him. The orange of the belly came out a little brighter than intended, but I am quite pleased with the results. What will become of him? Well, I think I'll donate him to the lass who is organising the convention and she can keep him for herself, give him away as a prize or raffle or auction him off to raise money for next years con.

He is drawn on an A4 piece of paper - but obviously a wee bit smaller on account of being in a rectangle.
Posted by LemurKat at 11:27 AM No comments:

For those of you that might be in Auckland next weekend - I will be attending Battlecry.

This is a roleplaying/wargaming/boardgaming/artist and all things good convention run annually.

I shall be taking a workshop on the Saturday afternoon, commencing at 2pm on how to go about creating your own mutant monsters. If you wish to come along, bring your imagination and a gold coin donation. It also helps if you have some artistic talents and a basic knowledge of anatomy and colour. Also, if you have any postcards with animals on them, particularly tigers, horses or fish.
I'm not sure how many people the workshop will take, but if you wish to secure a booking, email: info@battlecry.co.nz 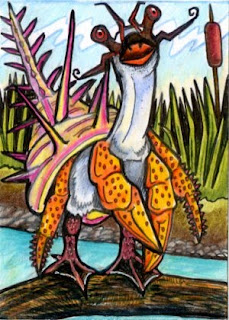 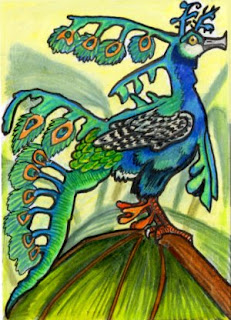 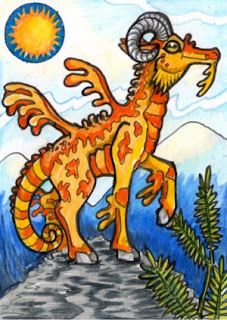 What's with all the seahorse/seadragon chimera requests recently? I guess fish are cool. Especially weird, spiky ones. Personally, I prefer lionfish. Although only from a distance, and aesthitically, because they are quite poisonous.
Posted by LemurKat at 10:24 PM No comments:

Tell me a story!

I joined this swap because I enjoyed the theme, then puzzled for ages on what I was going to illustrate. Final conclusion - somce of our beloved New Zealand picture books - in my style.

So here goes:
Little Kiwi Draws a Dinosaur
("Little Kiwi and the Dinosaur" by Bob Darroch) 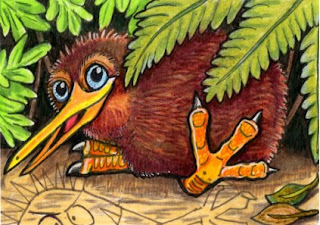 My Cat likes to hide in boxes
(Lynley Dodd) 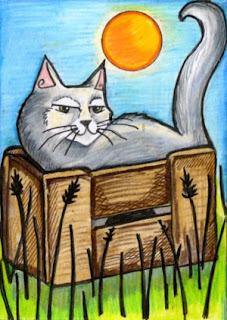 Lion in the Meadow
(Margaret Mahy) 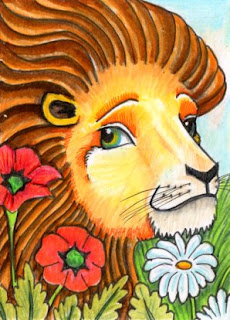 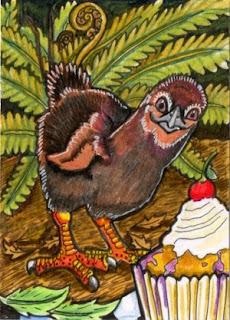 (okay, so not a beloved classic - but we can all dream, right?)
Posted by LemurKat at 11:01 PM No comments:

9. The Hermit
"Richard Henry" the kakapo was a real find for the Kakapo Recovery Project. You see, all of the Kakapo that had been "collected" were from Stewart Island, and displayed the genetic flaws of Inbreeding. Richard Henry was the sole remaining wild kakapo in Fiordland and his discovery and subsequent introduction into the Genepool helped to save the species from certain extinction. Richard Henry died last year. He was at least 80 years old. 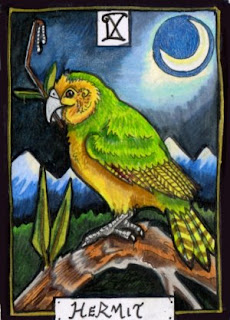 8. Strength
Haast's Eagle was the strongest and largest eagle ever to exist. It preyed on the large and powerful native moa, and went extinct shortly after they faded into obscurity. 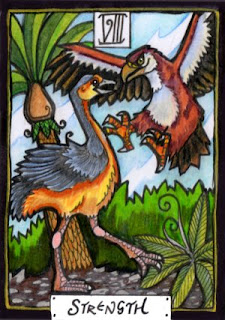 Posted by LemurKat at 5:02 AM No comments:

This Set was completed in 2009. Seventy-seven cards in total.

Major Arcana
will compile into one image soon 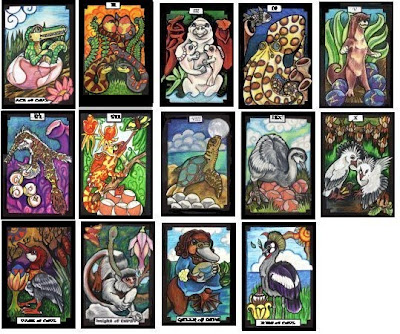 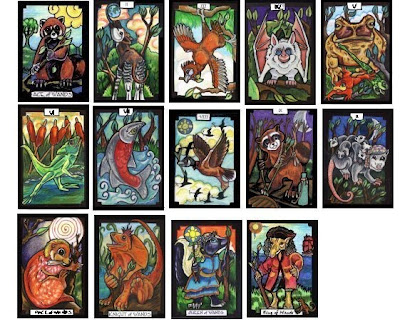 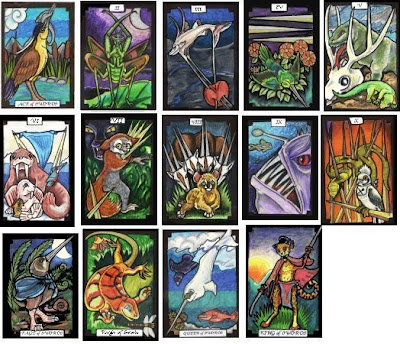 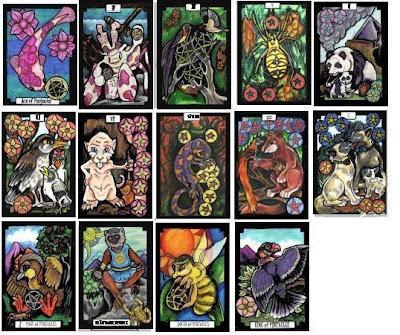 4. The Emperor
The Emperor encompasses pride and power and what better beast to represent it than the Stag? 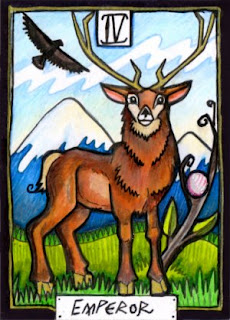 5. The Hierophant
Why a tuatara? The Hierophant is ancient and wise, and in touch with the divine. There is something deeply meditative about the way the tuatara sits. And they can live for over a hundred years. Two little native frogs play the part of his acolytes. 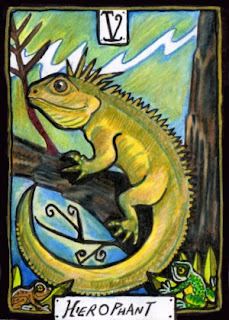 6. Love
Crested grebes have an elaborate and beautiful courtship dance, they show devotion to each other and they often remain in the same partnership for some years. They're also awesome birds to draw, with their funky feet and jagged figures. So how could I resist?
Methinks this one might be a Keeper. 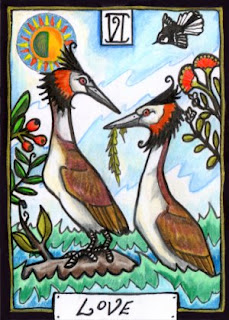 7. Chariot
The Chariot proved to be a challenge to conceptualise, but I am quite pleased with my conclusion. This is a card that indicates the coming together of opposites. Loyalty, faith and motivation that lead to victory, despite the odds. Originally I was intending to draw a godwit - or maybe a flock, symbolising the long journey that these birds make. However, I settled finally on the albatross. 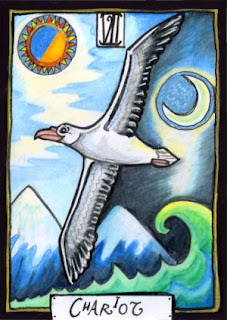 To those of you that are actually familiar with the tarot, particularly the Rider-Waite tarot, which this is based on, I hope some of the symbolism is apparant here - I have tried to draw on as many of the traditional ones as I can get away with.

If anyone is intersted in my Furrae Tarot, let me know and I can upload the deck here (or rather, small images of it).
Posted by LemurKat at 10:24 PM No comments: