One swallow doesn't make a summer.... 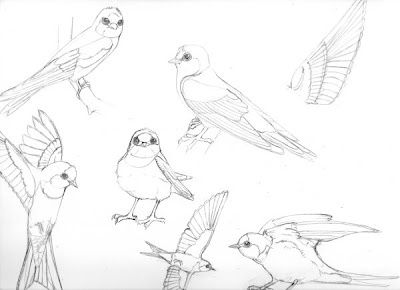 Some sketchwork on a bigger canvas than usual - and oh what a difference it makes! It gives me a chance to better study the wing structure - which in swallows is a little different - their primary feathers are so long! The only problem is... my lovely sketchpad with its gloriously smooth card pages that hold colour oh so well, are bigger than my scanner. So, in reality their are no missing wings or feet.

Maybe I should ink these babies up and colour them in? What do you think?
Posted by LemurKat at 11:11 PM No comments:

There were three cards that I was not happy with - well, four really, but I've stuck with the Tower. I believe I must be engaged in a bit of procrastination, because I am still not happy with either of them, but they'll do, for now. I can always change them at a later date!

First redraw was the Knight of Trees.

The original Knight of Trees was a kereru, which displays very few of the traits generally recognised in the Knight of Wands, plus I wished to use a kereru for the nines, thus this redraw involved making him a rifleman: 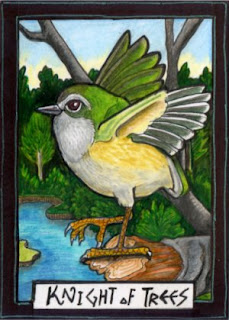 For The Moon, I could no longer use the possum - because he featured prominently on the Chaos card, and I also wanted bats in my deck, so here we have four bats (two species) frolicking in the moonlight. Something about the balance in this card bothers me - it might be the large white moon in the background? This is one I am tempted to redraw, except that bats are REALLY difficult. As you can see here, only one of them actually looks mostly decent. 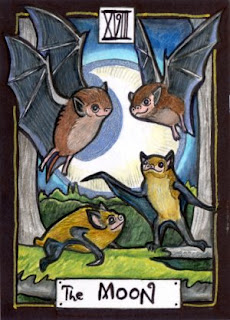 And finally we have the Seven of Trees.The original was one of my most popular cards, and I could not really understand why, because the owl just wasn't all that well drawn. Also, futher research indicated that it was not a clear representation of the true meaning of the card.

So, I began again. Now, I wanted to keep the morepork owl. But the Seven of Trees is a card of victory against odds, of standing up against those that might try to bring you down. A card of defiance.

It started with just one, but although I loved the owl, I didn't feel it got the message quite well across - as my husband said "That bird is toast". Not really the meaning I was striving for. So I tried again, this time with a smaller owl and two robins.

A much better card, except for one thing. The owl's head wasn't nearly as impressive.

So witness the miracle of cut and paste and then blend: 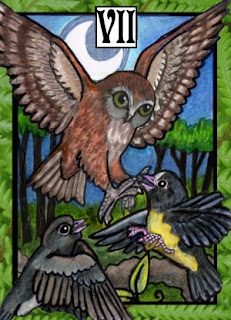 This is the card that will appear in the deck.
Posted by LemurKat at 10:03 PM No comments:

The box I have designed for this deck will hold up to 90 cards. The document will take the space of 9 cards. This leaves enough space for 81 cards. As you know - the regular tarot deck has 78 cards.

So, I decided on a few extras.

It was suggested by several of my online people that I could include a "Wyrd" card. This is a card representing fate or personal destiny and can translate as "Fate, doom, fortunes."

I chose to depic it with a trinity: 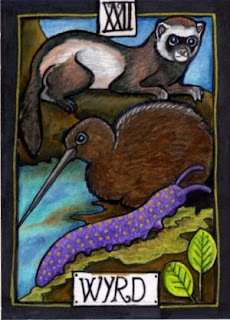 These three creatures are all predators, and as such represent a food chain - the kiwi might eat the peripatus, the ferret might eat the kiwi. The peripatus eats worms, btw. They also represent a timeline. The Peripatus is an ancient velvet worm, probably present on New Zealand when it split from Gondwana. The kiwi's ancestors migrated across and evolved, losing the ability to fly. The ferret was brought into NZ by the Europeans in an effort to combat the rabbit problem. He was a domestic species, that escaped - going feral.

I am not sure how one would interpret the Wyrd card in a reading - although it does seem to indicate a future that is hidden, and should remain unknown. In some decks, it is apparently represented by a "?".

For the final of the actual tarot cards, I thought I would go with the Happy Squirrel card - as created by the Simpsons. Interestingly enough, this is generally considered the 23rd card in the major arcana, but is also numbered #23. Sicne the Fool is numbered 0 and is the first card, the Happy Squirrel should technically be number #22.

But the number 23 seems to have a certain significance and is often related to Eris, goddess of Chaos and Discord.

Thus the Chaos card was born - aka the Grumpy Possum (since squirrels have never lived in New Zealand): 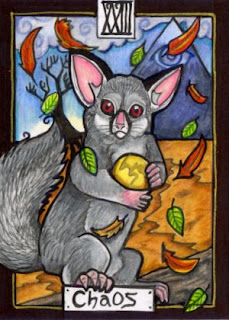 When drawn from  a deck, the Chaos card indicates that although something you are about to do may seem like a good idea - it will have unexpected, dire - perhaps even catalysmic, or at the very least, diabolic, consequences. As was the result of an attempt to establish a furtrade in New Zealand by introducing the (admittedly, pretty cute) brush-tailed possum. He stripped the trees bare, ate nestlings and eggs and bred, bred, bred. Now possums outnumber humans (in NZ) by almost 10 to one and extermianting them is impossible. As the species is endangered in Australia, drastic measures (such as creating a disease to make them sterile/wipe them out) is inadvisable. If only we could send them all back!

These two cards I am retaining for use in a give-away/competition at the end of the year - once the deck is completed and I have proofed it.

There will be one final card, but it is not part of the regular tarot and should be removed from the pack before a reading is undertaken.
Posted by LemurKat at 4:54 PM 1 comment: 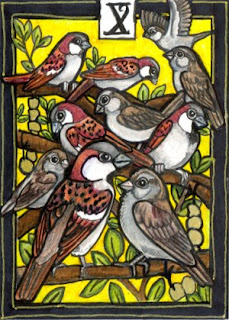 The Ten of Coins - House Sparrows are the most widespread of any avian species - being found in every continent (exept Antarctica) and most countries. From their humble beginnings in the Middle East, they have populated Europe, the UK, the Americas, and even gotten into the Pacific. Sometimes they were introduced, other times stowaways. They flourish in the urban environment, are sociable and get on well with other species. For a card to match success and great wealth, the House Sparrow seemed the most appropriate. 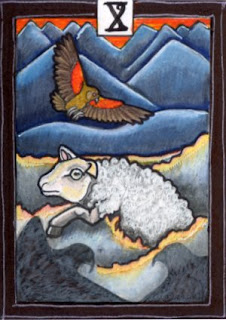 The Ten of Peaks - up in the snowy NZ Alps a merino sheep has been left in the highlands for the winter. Perhaps it was because she evaded capture, perhaps she had strayed too far. Whatever the reason, now she is floundering in the snow, trapped and half starved, and the predators are descending. Yes, keas may be parrots, but they have been known to eat meat - whether it be the fledglings of other birds (they enjoy muttonbirds) or the rich fatty flesh of sheep. Even without the birds eating her while she still lives, this sheep is most likely doomed. 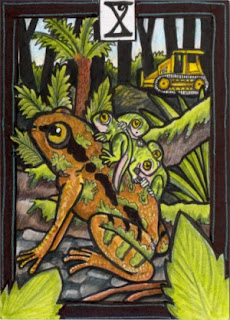 Ten of Trees - The Archey's Frog, burdened by his four froglets, can only watch and wait as the bulldozer makes a move on his forest home in the Coromandel. Some years ago, the government declared that they were looking to mine the Coromandel - one of our last refuges for this frog. The outcry was immense, and the project brought to a halt - the frog's home was safe. For now. But still, for this tiny, ancient amphibian, the outside pressures must be extreme - his environment is changing, shrinking, there are more toxins in the air and the water and he is already clinging to survival.
Yes, it is the male that raises the young. They spend their tadpole life in the egg, hatching as tailed froglets to ride on their father's back. He can have up to 13 young, but I really didn't feel like drawing ten, even though they would have been more suitable for the card.

The Ten of Waves, featuring the Maui Dolphin, was designed and uploaded several weeks ago, to celebrate my 3000th card.

Now only the bonus cards and the redraws to go!
Posted by LemurKat at 7:10 AM No comments:

NZ Naturally: To the Nines 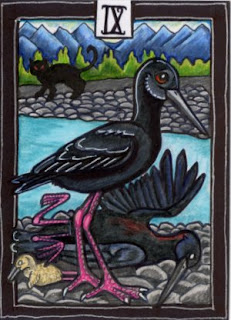 The Nine of Swords is not a positive card - it represents mental pain and anguish, disappointment, deception and shattered confidence. It is represented here by a Kaki, a black stilt, who has come home from foraging to find his mate and chick both dead - probably murdered by the black cat in the background there. Kaki parents will attempt to fight off threats, instead of luring them away, which is to their detriment. They also nest on the ground in the high country (hence the inclusion of a wading bird in the suit of the peaks) and are thus vulnerable to predation. 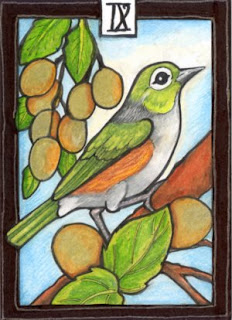 The Nine of Coins is a card of gratitude, luxury and self-sufficiency. Here this diminutive silvereye has more berries than she can possibly eat, so she's waiting for her flock to join her in her good fortune. 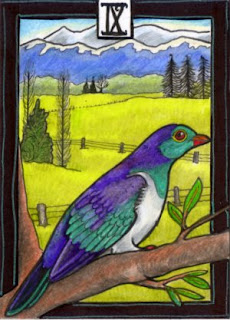 Nine of Trees - the Kereru is a true survivor. It is the last of the main fruit dispersal birds to survive in reasonable numbers. But as farmland encroaches on its forest home, and predators prey upon its chicks, it too is in decline. However, for the time its population is stable.

If you notice that the Kereru has now featured on two cards, that is because I intend to redraw the Knight of Trees with a more fitting representative - the Rifleman. 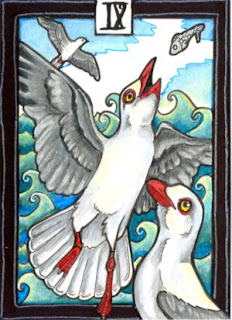 The Nine of Waves represents happiness and wish fulfilment - and what could make a gull more happy than fish falling from the sky? Someone to share their fortune with!

We're onto the home stretch now!

Left to draw are:
Ten of Peaks, Trees and Coins.
22. Wyrd
23. My "Happy Squirrel" equivalent
Bonus "artist" signature card.
(These three cards will bring me up to 81 - the Maximum amount that will fit in my 90 card box with the folded info sheet).

And to redraw:
The Tower (I'm not happy with the tomtit)
The Moon (with bats)
The Sun (maybe, not 100% happy with the fantail)
Knight of Trees (Changing the species from Kereru to Rifleman)
Seven of Trees  (My second most popular card, but doesn't represent the theme well).
Posted by LemurKat at 5:16 PM No comments: