Chapter 11: Will she share?
(And why does she kinda look like a pixie?)
This is Goat Pass Hut, photo referenced because I've never been there. 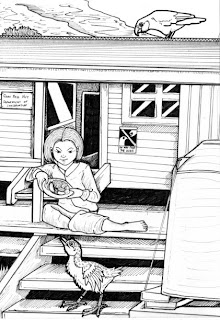 Chapter 12: Little Paku the kiwi is stuck :(
Her legs are too short - she can't jump out. 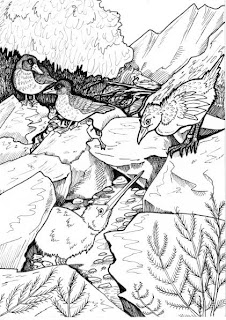 Chapter 13: "Lunch" with Hamu
First time I've ever googled "dead deer"
I think this one might benefit from being coloured, its a little too busy with the inking and hard to make out details. I got a wee bit carried away. 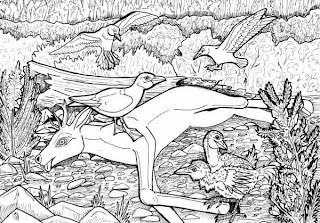 Chapter 14: House Broken
This was a challenging piece to do. You see, this is about the only landmark I have drawn so far that is completely fictious (the next will be the chicken barn). Originally I was intending to use the Dean's Homebush homestead that was shown all the time in the Christchurch Quake shots. However, I soon realised that it would be recognised and people would be saying "doesn't she realise Homebush is in Canterbury?" So then I tried to google homesteads in the Brunner region so that I could destroy them. Nothing showed up. We didn't get that far on our roadtrip, so I didn't get to look at any houses anyhow. Also, it seems a bit cruel to destroy someone's actual house.

So... this is a conglomeration of photos of Quake damaged houses. Predominately, the one on Sherborne Street (although not with the brick-crushed car beside it), with Homebush's pile of bricks thrown in and South of the Borders toilet. If you wonder why the windows aren't broken - well, that's kinda what happened - damage was quite discriminate.

I'm quite proud of the results. the first earthquake ravaged house I've ever drawn. 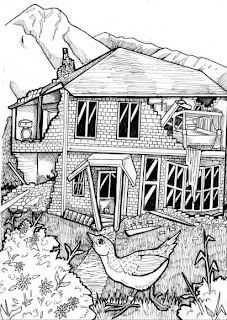