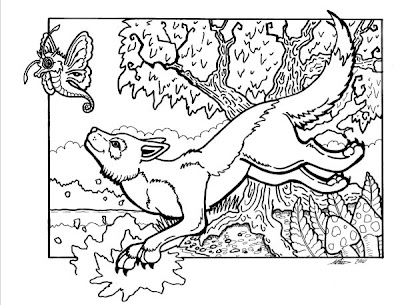 I have been asked/commissioned to draw the Battlecry logo for 2011. This is the piece and I think I may well colour it too. Battlecry is a role-playing convention held in Auckland every February - one month after Kapcon, the convention that we often attend in Wellington. Thus I have never been to it. However, since I feel like a change, my husband and I are now toying with the idea of attending Battlecry instead and then doing a tour of part of the North Island. So it should be fun.

For more information on Battlecry, http://battlecry.battlecry.co.nz/ where you can see the original linework of this piece. Although I prefer this one by far. The wolf looks leaner and meaner and less cuddly.
Posted by LemurKat at 6:10 AM