- Chapter twenty three = not yet begun

Went back and added some more to "Chapter 21: Catch of the Day". Decided Aroha had to at least try to get the fish. Also got them onto the Tranzalpine. I deliberated for ages how a weka could sneak onto the train - then I realised - she could just walk right on. The doors are left open for the passengers when they stop. The only bit of unrealism is that the train doesn't normally let the passengers off and on again at Moana. But we'll just put that down to some changes to services thanks to the EQ.

Of course, once on the train, the birds couldn't roam around at will - not one the passengers had seen them. So they would have to be captured and put into some sort of confinement until they could be safely "thrown off".

Next stop - Stillwater. A tiny township of which I remember nothing (except the lineup of cars. No wait, that was Dobson.), If I recall, Stillwater was all old wooden buildings, moss covered power lines and fense posts and very little else. Oh, I think there was a train yard too. It's the junction between the west central line and the tranzalpine line. 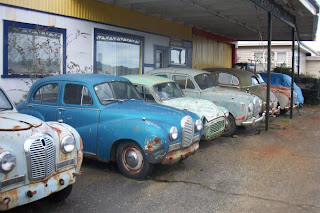 Here's the passage where Maru gets caught (he's a bit faster than Aroha, I guess she's eaten too much human food):

Maru was still free. He leapt up and over the backs of the seats, ducked below grasping hands and darted under a table. A human female dropped to her knees to grab her and he leapt on her head. His feet tangled in her hair. He struggled free and ran the length of her spine. She shouted and flailed, trying to push him off, then knelt upright. He slid to the floor and onto his rump. With a squawk of outrage, he ducked below another pair of hands. Dove between a male's knees. Dodged a flying tackle. Sprang up onto a seat, and then onto the back. The train lurched. He lost his balance, flailed. Flapped his wings to try and steady himself. Slipped. Landed heavily. Hands closed about his body. Shrieking fowl words, he kicked and bit as he was hauled roughly into the air and shoved beneath the basket beside her. Aroha made a dash for the gap as the basket was lifted. But the human was too fast, and she too tired.