Well... I am too exhausted to write tonight, and thus my wordcount remains unchanged from last night. Today was spent instead drawing. I thought I'd share with you a couple of my recent ATCs. I'm not making as many ATCs anymore, since I prefer the size of postcards. But as I'm still active in some of the online swaps, I've got to come through with those.

These two are for the themes : A dog in Shakespearean clothing and a cat in Mediavel garb. I elected to ressurect two of the minor characters of my Furritasia stories/world. 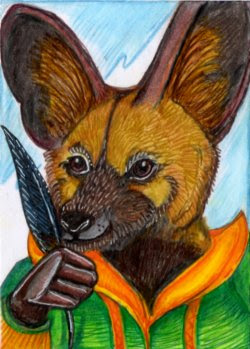 Julius Lowe is the vocalist of the folk-doom-metal band Aeternity. His species is Lycaon, aka African Wild dog. 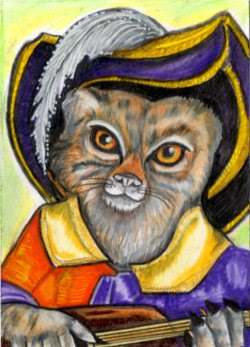 Dimitri is a pallas cat tinker-bard who travels the countryside in his little covered wagon. His companions are a magpie-jay called "Rumour" and a llama called "Babe".
Posted by LemurKat at 9:13 PM