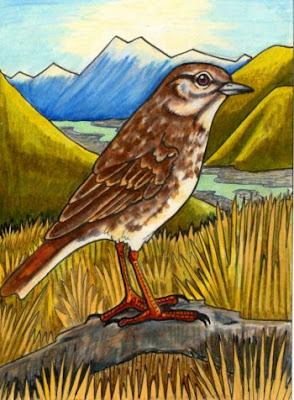 Pihoihoi the Pipit
This little bird seems fairly drab and nondescript, and thus is one of those innocuous small birds that we don't ever really think about. He's about the size of a thrush, and speckled rather like one. But in behaviour he's more like a skylark. Skylarks are an introduced species and both birds share the same habitat. Both are mottled, with the pipits eye-stripe being better defined. The Pipit bobs and runs along the ground, flicking his tail rather comically, whereas the skylark behaves in a rather more refined manner. Skylarks also have a slight crest and fly directly upwards to warble forth at the top of their lungs. Pipits have a less direct, more undulating flight. Insectivorous by nature, Pipits have suffered from the use of insecticides and now their numbers are in decline. It favours open habitat - ranging from sea level to above the snow line. A sturdy cup-shaped nest is built on the ground, under a plant. This protects it from aerial predators, but not mammalian. The eggs are freckled in brown and grey and take around two weeks to hatch. A pair may raise as many as three broods per season. After breeding, in autumn, pipits gather in flocks.
This proud wee chap (pictured here above a high country river valley) is currently up for sale on Trade me:
http://www.trademe.co.nz/Browse/Listing.aspx?id=329174886
He'd love to perch on your wall!
Posted by LemurKat at 10:50 PM