And thus concludes the Fs. 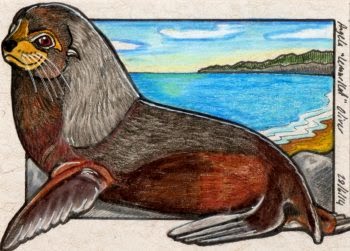 The Fur Seal is characterised by her dense coat of underfur, intermingled with longer guard hairs. These provide her with insulation against the cold water and also made her desirable to trappers during the 19th century. She is able to turn her hind limbs beneath her body, and hold herself upright with her front limbs, which allows her to move on all fours at some speed. This is a trait she shares with Sea Lions, but is not found in the "true" seal species. The male is up to five times her size. During breeding season, the females come ashore and gather in groups, which are lorded over by the dominant male. Here she will birth her pup and mate in preparation for the following year.