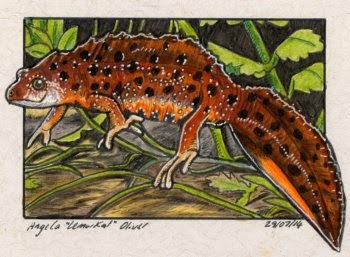 The Great Crested Newt is a relatively large amphibian, with the female being longer than the male. Predatory in nature, his main diet consists of worms, insects, slugs and snails, although they will also dine on other amphibians and cannibalism is not infrequent. He uses his strong sense of smell to hunt, but also has pressure sensitive cells on his head, that can pinpoint the movement of prey within the water. During breeding season, the male grows the dramatic crest, which he uses to attract the females, first returning to the pool in which he hatched. After mating, she will lay up to 300 eggs, placing each on the underside of an underwater leaf.