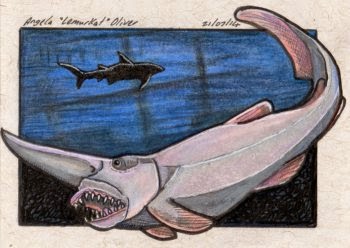 A strange monster of the deep, the Goblin Shark is rarely seen and little is known about his behaviour. His large, flabby body and short fins suggest that he leads a largely sedantary lifestyle, probably ambusing his piscian prey. When he bites, he expands his jaws using two specialised ligaments. This allowes him to seize his prey in his needle-thing teeth, before his bashyal, bones analogous to a tongue, descends, increasing his oral cavity and sucking the prey down his throat. . His long snout is likely to play a sensory role, and is capable of detecting electric currents in the water.