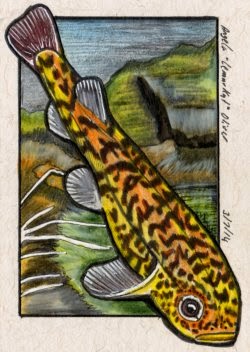 The Galaxias are a Genus of small freshwater fish, found in southeast Australia and  New Zealand with representatives in South America and Africa. They are specialised in living in the higher, cooler climates such as alpine streams, rivers and lakes. Despite this, many species include a marine stage in their life cycles. Larvae are washed out to sea to develop, swimming back up the river as small fry. The introduction of trout to New Zealand waterways has severely and negatively impacted many of these fish species, with populations now becoming fragmented and restricted. This wee fellow is a New Zealand Flathead Galaxias, his range restricted to a few rivers in Otago.

For more on freshwater fish of New Zealand, look out for Inanga and Kokopu.