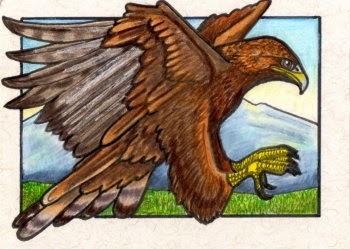 The Golden Eagle is an apex predator, capable of lifting prey as large as a hare, marmot or even a baby deer. She forms a monogamous, lifelong partnership with her mate, and together they perform an aerial courtship display in which the male drops a rock, then swoops to catch it. The female shows her aerial prowess in a similar manner - although often with a dirt clod or twig. Together they construct a large nest, called an eyrie, on a rocky ledge. This is created from branches and padded with grass.
Posted by LemurKat at 7:10 AM