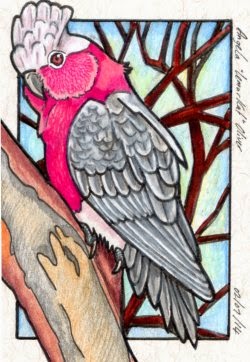 The Galah is a species of cockatoo, widespread across Australia. She favours the open country and occupies urban environments, benefitting from human colonisation. She flocks with others of her species, or occasionally corollas. Her mate bond is long-term and monogamous,  Her nest is built in tree hollows and both parents share the incubation. She is a popular bird in the pet industry and she has been known to interbreed with Major Mitchells and Little Corollas, as well as, most unusually, her smallest relative, the cockatiel.

"Galah" has become an Australian slang term for "fool" or "idiot". Like all parrots, however, Galah are no fool, although they are noted for being noisy.
Posted by LemurKat at 7:08 AM