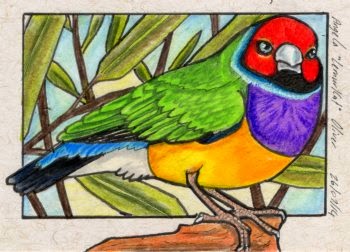 The colourful, tropical Gouldian Finch makes his home in the savannah woodlands of Australia's Northern Territory.  He leads a nomadic lifestyle, living within a relative small area and moving only when water or food becomes scarce. Whilst he is not particularly sociable with his own kin, he will joined mixed flocks with long-tailed and masked finches. In the early part of the dry season, whilst there is still plenty of food to be found, the male begins to court the female. He bobs about her, ruffling his feathers to show his dramatic colouration to their full extent, expanding his chest and raising his head feathers. She will lay 4-8 eggs, and he remains with her, helping her to raise their brood.