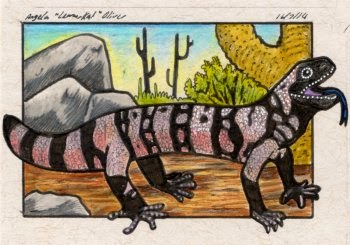 The venomous Gila Monster stalks the southwestern deserts of the United States. Slow-moving and sluggish, he spends much of his life either underground or in rocky shelters, being most active in the early morning or after rain. He does not eat often - 5-10 times per year - and he uses his acute sense of smell to locate eggs or carrion. When he does feed, he gorges himself, swallowing animal prey head-first. His venom is considered more for defence than the capture of prey, and contains a neurotoxin. His bite contains only small amounts, and his bite is not fatal to humans although it is very painful. Once he latches on, it is very difficult to dettach him.