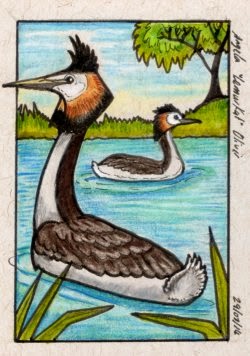 The Crested Grebe, and grebes in general, have always rated highly on my "animals I love" list. It's the angular nature, the impressive crest and general appearance, so it is with some delight that I present today's Animal of the Day.

Grebes are the sole members of the Podicipedidae Family, which translates loosely as "rump foot". They are named such due to their legs, which are positioned so far back that these handsome water birds are unable to walk easily on land, although they can run for short stretches (before falling forward). Thus they spend most of their life afloat. Their feet, with lobed toes, are used as propellers, pushing them forward and also downwards in deep dives as they hunt fish and other freshwater life. These handsome fellows are Crested Grebes, and they are spread across the world, with populations scattered across Eurasia, Africa and Australasia.
Posted by LemurKat at 7:49 AM