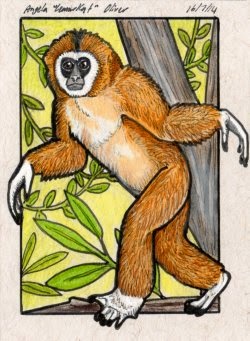 The Gibbon is one of the so-called "lesser" apes, being behaviourally closer to a monkey than an ape, but displaying the ape's most identifiable feature - the lack of a tail.  The Gibbon is characterised by his long arms, which he  uses for brachiating through his rainforest home. He can do this an speeds approaching 55 km/hr and make leaps of up to 8 metres. With such long arms, he cannot walk on all fours and instead moves upright. He is a social beast, pair-bonding with his mate and defending his territory through loud vocal displays. The pair often duet together, with the sound carrying up to 1 km.