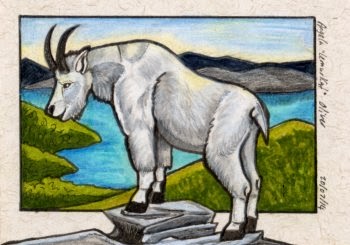 This fellow is an American Mountain Goat. In fact, he is not even a goat at all, but one of the so-called "goat-antelopes".  He is a high altitude and sure-footed beast, making his home high in the alpine peaks of the Rocky and Cascade Mountain ranges. During breeding season, males compete for the females, engaging in some rather vicious head-butting. Afterwards, the males break off into small bands, leaving the females together in a herd to last out the winter and birth their kids come spring. Female goats, who also have horns and beards, are quite aggressive with one another as they jostle for positions in the hierarchy.
Posted by LemurKat at 8:40 PM