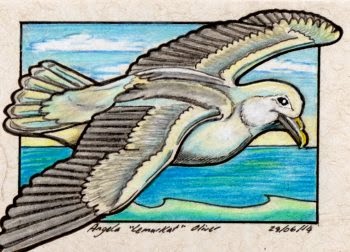 Although it may superficially resemble a gull, a Fulmar is actually a tube-nosed sea bird, making her kin to the petrels and albatross. She leads a pelagic lifestyle, patroling the ocean in search of squid, fish and shrimp. She spends most of her life on the wing or the water, being clumsy on foot. During breeding season, she selects a rocky cliff ledge on which to lay her single egg. Historically, Northern Fulmar populations have been exploited for food, with their oil and feathers also being used by the island inhabitats of St Kilda until 1930.