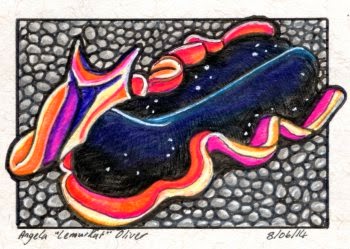 There are thousands of species of Flatworm: some are parasitic, others are free-living predators. The free-living ones are rather more pleasant to both look at and draw and they mostly occur in the sub-division Turbellaria. Flatworms are characterised by their bilateral symmetry: their right side mirrors their left and they have three cell layers. They lack a body cavity and contain no specialised respiratory or circulatory organs. Thus they use their entire body to breathe, and if they dry out then they will die, thus species are found in water, damp forest, or the intestinal tracks of other creatures. The predatory Turbellaria species use cilia or body contractions for locomotion. Some species even throw a thread of mucus for them to climb up. Mouths are often located on the underside of the body, and sometimes very large.

Flatworms are hermaphrodites, and can be both male and female simultaneously. To mate some species engage in "penis fencing" in which the winner gets to be the male for the encounter, and the loser adopts the female role and must carry the eggs.
Posted by LemurKat at 8:47 AM