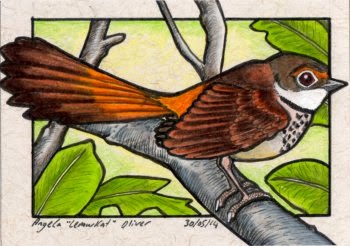 Fantails are small insectivorous birds of Australasia, Southeast Asia and India. He is a specialist aerial feeder, snatching flies and other insects on the wing. His tail is long, longer than his wing, and spreads into the characteristic fan shape. His short, tapered wings allow him greater maneuvorability in pursuit of his tiny prey. Despite his short wings he is capable of sustained flight and has colonised a number of offshore islands, including New Zealand and Samoa. There are a number of different species, with the largest being Australia's Willie Wagtail (NOT a wagtail). This colourful fellow is a Rufous Fantail. He lives in eastern Australia, heading north for the cooler months, and returning to the south-east breed in spring.