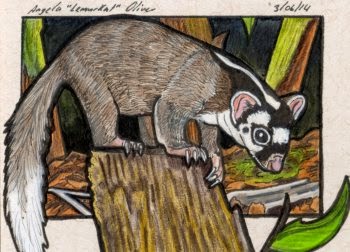 Ferret-badger is the name given to five species of mustelid, resembling somewhat a hybrid between ferret and badger (hence the name). This fellow, the Chinese Ferret-badger, inhabits tropical and sub-tropical forests, including grasslands. He is the smallest species of badger, measuring a mere 30-40cm from nose to tail-tip. He is nocturnal and follows an omnivorous diet of earthworms, amphibians, insects and fruit. During the day he retreats into burrows or rock crevices and is a skilled climber, occasionally ascending to sleep in the crook of a tree.