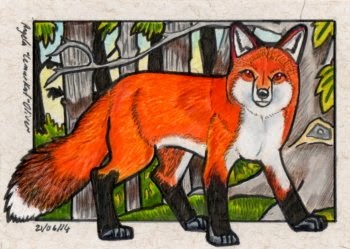 The name "Fox" is given to a number of smaller species of the Canine Family, but "true foxes" fall into the Genus Vulpes. The most well known and well recognised species is the Red Fox.  He is extremely widespread across the Northern Hemisphere, with numerous subspecies. The Red Fox lives in pairs or small family groups, either establishing a territory or leading an itinerant lifestyle. His main diet consists of rodents, with the occasional rabbit or larger prey taken. Urbanised Red Foxes have become something of a problem in cities, where they can raid rubbish bins, attack chickens and ruin gardens.