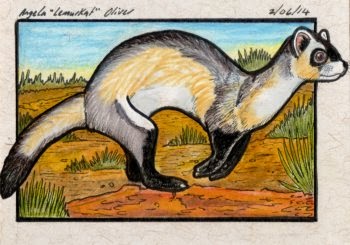 The regular ferret: the one that has been banned as a pet in New Zealand and certain states of America, is a domesticated beast and will feature under P, for Polecat, its wild ancestor.

The Black-Footed Ferret inhabits the prairies of mid-west America. With her diet consisting predominantly of prairie dogs, wild populations declined significantly as the prairie dogs numbers plummeted. This, along with sylvatic plague, lead to becoming extinct in the wild by 1987. Luckily for this little carnivore, a captive breeding project had been launched and from 1991-2008, re-introductions in the wild were made. She is now classified as merely Endangered. She is solitary and nocturnal, creeping through prairie dog burrows and hunting them in their sleep.
Posted by LemurKat at 9:08 AM