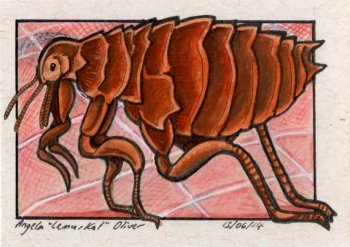 Today's animal is one I am sure you will all love. NOT!

The Fleas are an Order of wingless insects with a taste for blood.With his long hind legs he can leap up to 18 cms vertically and 33 cms horizontally. This allows him to hop from one host to another. Different species parasitise different hosts - with cats and dogs being common carriers. The female Flea will lay her eggs after engorging herself with blood. These eggs easily roll off and become lost in the carpet, where they will hatch up to two weeks later, thus inflicting a plague of epic proportions on poor, unsuspecting humans who have allowed an afflicted feline to share their living space.

Bitter? Heck yes, we had to deal with a flea infestation back in my old flat - and all because my flatmate befriended a stray cat and let him sleep inside. Have you ever tried to rid your house of fleas? It involved several cans of fly-spray, vacuuming, washing the sheets (and pillows) almost every day and far too much itching! Not only is it uncomfortable and embarrassing (because the presence of fleas is generally thought of in relation to poor hygiene) but it is also dangerous as fleas can carry disease and the bites can become infected. Calamine lotion helps with the irritation.

Anyway, back to the factual stuff.

These eggs hatch into larvae, which feed on any available organic matter - which probably also includes bits of dead human skin - and will then pupate. They are capable of over-wintering in this state. Once they emerge as adult fleas they wait for a likely host and hop aboard, ready to start the cycle again. A well-fed adult flea can live for 100 days and lay over 5,000 eggs.

So, let that be a lesson to you - keep your pets flea-free!