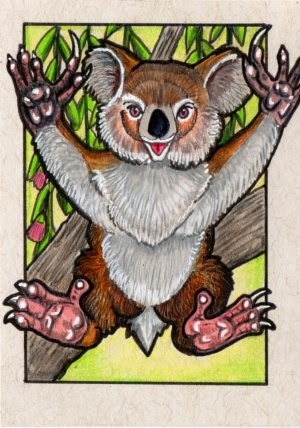 The Dropbear is the koala's larger, and more dangerous, cousin. He is about the size of a large dog and can weigh in at up to 120 kg. His preferred habitat is dense forest, with sturdy tree branches and thick canopy, in which he lurks and waits for his prey. Dropbear have a unique method of hunting and one that is well suited to the koala's sedantary way of life - he waits until a potential victim wanders beneath his branch and then drops from it. Often his weight will stun the prey, and it is then quickly dispatched with his specially adapted "killing claw". All koala have two thumbs, but in the Dropbear the claw of the inner thumb has modified into a knife. Unlike most predators (and despite popular rumour), the Dropbear does not sport elongated canine teeth, in fact his most dangerous are his pre-molars, which are razor-edged and powerful. His natural prey is large macropods - kangaroos - but with  more and more humans encroaching on his habitat, attacks of people have become all too commonplace. It is said that anointing oneself with vegemite will act as a sort of Dropbear repellent.