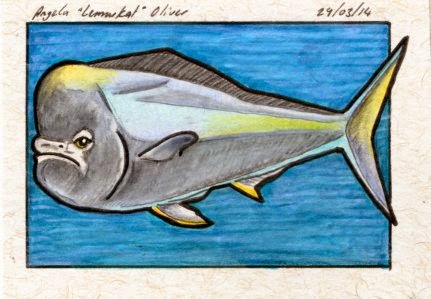 The Dorado, or Dolphinfish, is a surface-dwelling rayfinned fish also known as mahi-mahi. He is short-lived, with most living no more than 4-5 years, but grows very fast and matures at around 4-5 months of age, and can breed year round with females producing between 80,000 and 1,000,000 eggs each spawning event. Of these massive numbers, only a small proportion will survive, but it is enough to keep the population stable. His Spanish name - Dorado - translates as "golden", and when out of the water his scales do change colour, eventually fading to a muted yellow-grey upon death. A popular recreational fish, the Dorado is considered of "least concern" and appears on many menus.
Posted by LemurKat at 6:33 AM