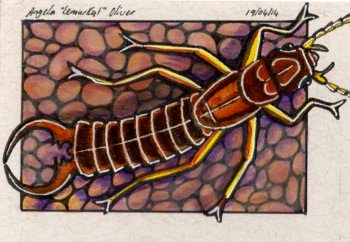 There are about 2,000 species of Earwigs, spread throughout the world and characterised by the large pincers that grace their abdomen. Nocturnal in nature, she hides within crevices during the day, favouring the damp and the dark. At night she ventures out to chew her way through foliage and flowers and is charged with damaging crops. She is a protective mother, driving her mate away shortly before laying her eggs. These she protects from predation, keeps them clean from fungi growth and may help her nymphs hatch - which they do after 7 days. Their first meal is their egg casings, and the mother proceeds to reguirgitate further meals for them. They grow through several moults, eating their old skins, until they attain their adult stage. If their mother dies before they mature, they may eat her.
Posted by LemurKat at 9:22 AM