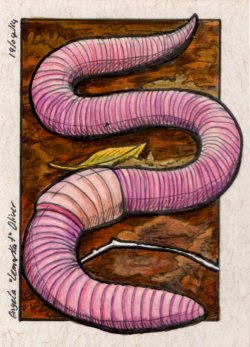 The Earthworm is a blind tube-shaped Annelid, usually found in the soil. Their diet consists of organic matter, both live and dead. Earthworms are hermaphrodites and capable of regenerating lost segments. It is a common belief that a worm split in half will regnerate into two worms, this is - for the most part - a myth, although if it were, theoretically, bissected in the right place, it is possible. For the most part however, one end will regenerate and the other end will die. Reproduction occurs above ground, usually at night. The eggs develop inside the clitellum - the thickened "saddle" near the head end of the worm - which they then slip out of, leaving behind as an incubator in which the offspring can develop. When the juveniles emerge, they resemble tiny adults. Earthworms have a simple digestive structure and play a major role in soil fertilisation. They are commonly used to decompose food scraps.
Posted by LemurKat at 8:25 AM