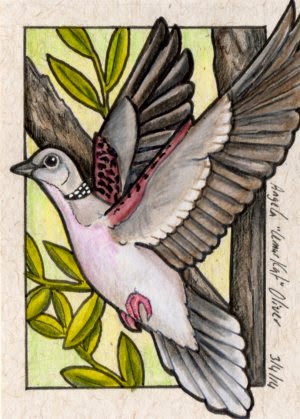 The name "Dove" is Germanic, derived from the bird's diving flight. Whilst there is no technical difference between Doves and Pigeons, the term Dove is generally given to the smaller birds within the Columbidae Family. This fine specimen is a Turtle Dove, a migratory species widespread across Europe. The term "turtle" is linked to her cooing call of "turrr-turrrr". Due to this mournful, plaintive call and her tendency to form strong pair bond, the Dove has become an emblem of peace and devoted love. After a courtship dance, two eggs are laid in a rather flimsy twig nest. The belief that these would always hatch both a male and a female chick is the origins of the terminology "pigeon pair". These chicks are fed on reguigitated "milk", which is secreted from the lining of the parents' crops. It apparently resembles cottage cheese.