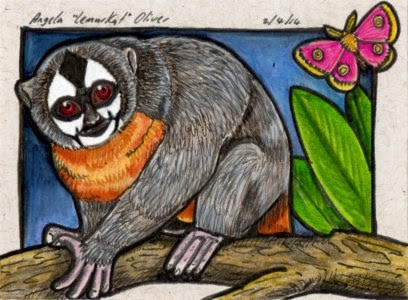 The Douroucouli, or Owl Monkey, are a Genus of nocturnal monkeys inhabiting the forests of South America. His eyes are large and round, giving him excellent night vision and he has good spatial awareness, making him adept at catching insects, although he also enjoys a diet of fruit, flowers and leaves. Unusual among New World monkeys, he has no colour vision. He establishes a monogamous bond with his mate, and they produce one offspring a year. The mother carries the infant for the first few weeks of its life, and then it is put into the care of its father. Groups consist of the pair and their immature offspring, with maturity reached at between 2 and 5 years of age, depending on species.
Posted by LemurKat at 6:34 AM