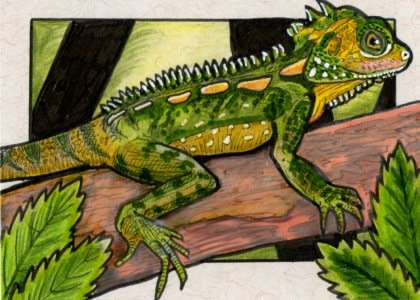 There are a number of Dragons inhabiting Australia, a common name given to three different Genera of agamid lizards: the Bearded, the Water and this fellow - the Forest (the Boyd's Forest, to be precise). You can find him in the rainforests of Northern Queensland (we found three on our night amble in the Daintree!) where he clings to the trunks or branches of trees. Here he waits for his prey - primarily invertebrates - to venture past. One of his favoured foods is earthworms, and for these he will descend from his lofty perch and amble along the forest floor. Unlike most lizards, he does not bask in the sun and prefers to allow his body temperature to fluctuate with that of the air - although being in Queensland, it's pretty humid and warm all of the time.
Posted by LemurKat at 6:39 AM