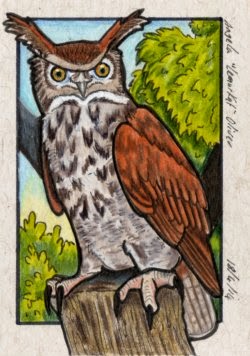 The Eurasian Eagle-Owl is a large, powerful bird with a wingspan of up to 200 centimetres. He is characterised by his ear tufts - which are not ears at all, but merely tufts of feathers. His large size and powerful talons mark him as a formidable predator, and he flies silently through the night, hunting mammals up to the size of a hare. After pouncing, he quickly dispatches the prey with his talors and, if necessary, a sharp peck to the head, before carrying it off to be devoured. Large prey must be consumed on the ground, with the owl risking predation, or losing his supper, to a prowling fox. Small prey is swallowed whole, with the bones and other undigestible bits being regurgitated later as a pellet.
Posted by LemurKat at 6:29 AM