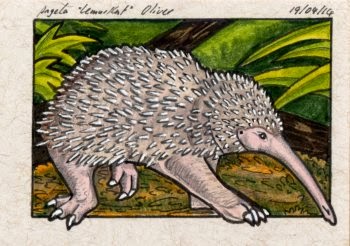 The Echidna is a monotreme - a mammal that lays eggs. She is a relatively small, plump creature equipped with a long snout that she uses to sniff out worms and insect larvae. Her body is covered in short spines and coarse hair, offering her some protection from predators. There are three species: two Long-Beaked species, of which one is depicted here, and the Short-Beaked. All are equipped with sturdy claws for ripping apart logs and long tongues, for lapping up insects, meaning that they superficially resemble anteaters.
In breeding season, as many as ten males will form a line, with the smallest males at the end, and trail the receptive female. Two weeks after mating, she will implant one tiny, fertile egg into her rear-facing pouch. It hatches after ten days. The infant Echidna is known as a puggle, and he will live in the pouch for 2-3 months, before being pushed out to see the world.
Posted by LemurKat at 10:28 AM