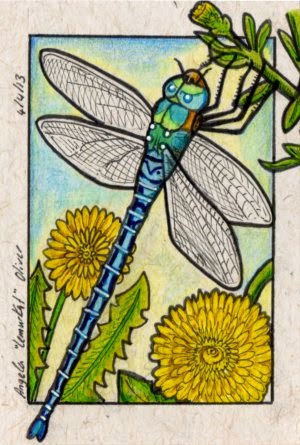 Dragonflies are an Order of insects characterised by powerful wings, where the hind wing is broader than the fore wing, large multifaceted eyes, and long, streamlined body. Dragonflies are hunters on the wing, skimming low across the water to snatch up smaller insects, including mosquitos, ants, flies, wasps and occasionally butterflies. There are almost 6,000 species ranging in length from several millimetres to the bulky petaltail of Australia - which can measure up to 125 millimetres long. Dragonfly larvae are known as naiads and hatch from eggs laid in the water. Here he preys on mosquito larvae and even tadpoles or small fish. Eventually he  climbs out of the water, outer skin cracking open and out he will climb, a fresh new dragonfly.
Posted by LemurKat at 8:17 AM