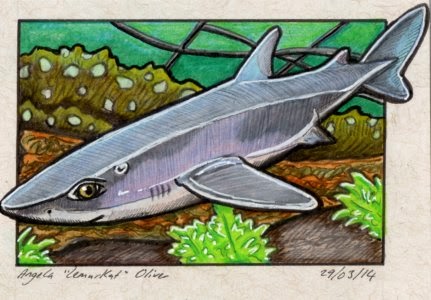 Dogfish are a Family of cartilaginous fish and are, essentially, small sharks. This Spiny Dogfish was once the most abundant fish in the world, but thanks to over-fishing he is now vulnerable to extinction in many parts of the world, populations around Europe having decreased by 95%. Male fish sport a pair of pelvic fins, known as "claspers" which he uses to grasp the female when mating. Fertilisation is internal, and the eggs are retained within the female until they hatch. This process is known as "ovoviviparity".
Posted by LemurKat at 6:43 AM