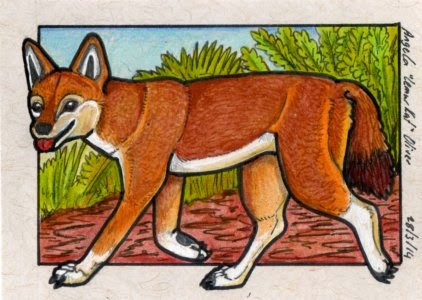 The origin of the Dingo is much questioned. She is a subspecies of wolf and resembles the domestic and feral dogs of southern Asia and thus it is widely theorised that she was once domesticated. She has inhabited Australia for around 4,000 years, and now can be found in desert and grassland. Here she dens down in abandoned rabbit burrows. Packs generally consist of a mated pair and their offspring. An apex predator, her main diet is rabbit and juvenile kangaroo, although larger prey may be taken through co-operative hunting. Whilst her killing of rabbits is beneficial to cattle stations, she is also known to prey on sheep and as such is both loved and loathed.