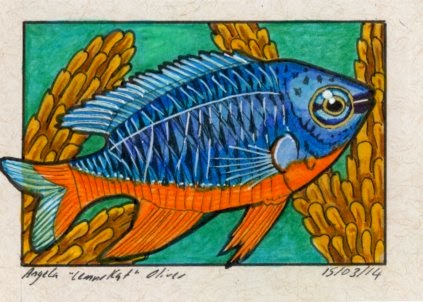 The Damselfish are a Family of fish closely related to Anemonefish. She generally favours tropical reefs although a few species have been found in stretches of freshwater. During the daylight hours she feeds on small crustaceans - like copepods. To attract her attention, male Damselfish  rise upward in a water column, then swim swiftly downward; the females favour the males who display the greatest vigour, which they measure by the sound of the pulse that is created through the water. Eggs are adhesive, and adhere to a substrate which is fiercely guarded by the male. This specimen is an Azure Damselfish and she is popular with aquarists as she is hardy and less aggressive than other Damselfish species.
Posted by LemurKat at 8:36 AM