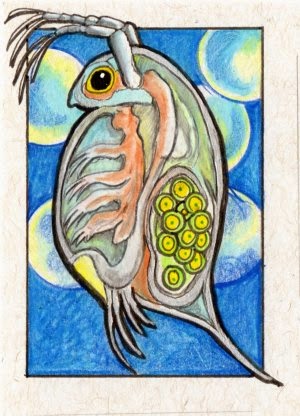 The Daphnia is a tiny crustacean, measuring no more than 5mm in length; she is a component of plankton. Various species populate different habitats - from freshwater to marine, including acidic swamps. Sometimes referred to as "water fleas" her motion through the water somewhat resembles that of a flea. Many species are translucent, which makes her popular with scientists as one can study her entire system, including her beating heart - which leads to studying the effects of caffeine and nicotine on heart rate. Reproduction is both asexual and sexual . Eggs are released regularly with each moult, but towards the end of the growing season she produces a few male offspring which fertilise the last, hardier eggs so that they will withstand harsher conditions.
(I'm confused too, crustaceans are weird)
Posted by LemurKat at 6:40 AM