It is the moment you have all been waiting for - with bated breath - it is finally time to conclude the Cs. You thought this day would never come (I confess, I did!) and yet here he finally is: 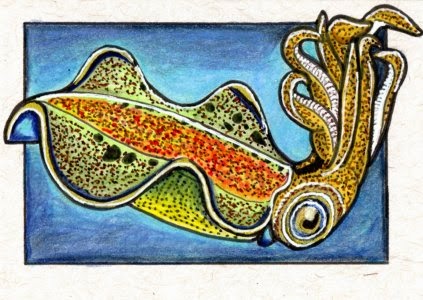 The Cuttlefish is a cephalopod, related to squid and octopi. He is named for his unique internal shell - the cuttle. This provides buoyancy by regulating his gas-to-air ratios. It is also used by jewellers for mould casting, and aviaculturalists - where it is given to parrots to gnaw on as a source of calcium. He can also change colour to blend in with his surroundings although he, himself, is actually colour-blind. Despite this, his vision is very good, and his eyes are fully developed whilst he is still in the egg sac. Male cuttlefish occasionally employ sneaky tactics to mate with the females. The female is guarded by a big, strong male and the smaller male will swim past him, pretending to be a female: he changes his colour, hides his extra pair of legs and even will pretend to be carrying an egg sac. He then mates with the female. The females tend to favour the sperm of these devious, intelligent males.

Other awesome facts about the Cuttlefish:
- He produces ink like a squid - this ink was once used to make the colour known as "sepia".
- When hunting on the ocean bed for his favourite prey of crabs and fish, he squirts water blasts at the sand to expose his intended dinner, then snatches them up with his feeding tentacles.
- Some species produce a toxin that is as powerful as that of the blue-ringed octopus.
- His blood is a greeny-blue colour.
- He has three hearts (like an octopus).
- No body quite knows how a colour-blind creature living in the dark oceanic depths can change his colour to so perfectly match his surroundings.

Cuttlefish are awesome! I will never eat them or feed their internal structures to my parakeets again (don't worry, I don't actually own any birds, or intend to ever again).

And tomorrow, let the Ds begin!
Posted by LemurKat at 7:46 AM