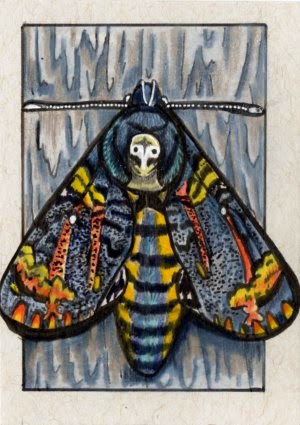 The Death’s-Head Hawkmoth is characterised by the white marking on the back of his thorax that sometimes resembles a stylised human skull. There are three different species, this is the Asian one. The colouration is designed for camouflage. To deter predators, he can emit a loud squeak by expelling air from his pharynx and will also flap his wings, flashing his yellow abdomen. He also has a taste for honey, and will raid beehives. To enter unmolested, he accurately mimics the scent of the bee. Eggs are laid on the underside of the host plants, and the relatively sedantary caterpillars will bite if disturbed. They burrow into underground chambers to pupate.