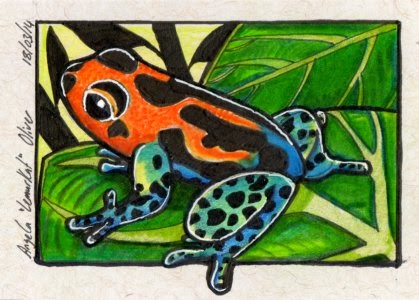 The Dart Frog gets his name from the poison he secretes, which was once used by the indigeneous people of the Amazon to tip their darts. Only four species are actually used for this purpose, and the toxicity of the frogs ranges from fairly minimal (as in this Imitating Dart Frog) to lethal (the Golden Poison Frog, possibly the most toxic living animal). This poison is secreted though the skin and protects the frog against predation. To further advertise this poison, the Dart Frog is brightly coloured. These toxins may be related to their diet of various poisonous arthropods: such as ants, centipedes and mites, in which the various toxins are not synthesized but instead become concentrated. Like all of the world's frogs, the Dart Frogs are under threat from chytrid fungus, a widespread and lethal disease that could see frogs vanishing forever.